Thomas Bartholin (/bɑːrˈtoʊlɪn, ˈbɑːrtəlɪn/; Latinized: Thomas Bartholinus; 20 October 1616 – 4 December 1680) was a Danish physician, mathematician, and theologian. He is best known for his work in the discovery of the lymphatic system in humans and for his advancements of the theory of refrigeration anesthesia, being the first to describe it scientifically.

Thomas Bartholin was the second of the six sons of Caspar Bartholin the Elder, a physician born in Malmö, Scania and his spouse Anne Fincke. Bartholin the Elder published the first collected anatomical work in 1611. This work was later augmented, illustrated and revised by Thomas Bartholin, becoming the standard reference on anatomy; the son notably added updates on Harvey's theory of blood circulation and on the lymphatic system.

Bartholin visited the Italian botanist Pietro Castelli at Messina in 1644. In 1663 Bartholin bought Hagestedgaard, which burned down in 1670 including his library, with the loss of many manuscripts. King Christian V of Denmark appointed Bartholin as his physician with a substantial salary and freed the farm from taxation as recompense for the loss. In 1680 Bartholin's health failed, the farm was sold, and he moved back to Copenhagen, where he died. He was buried in Vor Frue Kirke (Church of Our Lady).

In December 1652, Bartholin published the first full description of the human lymphatic system. Jean Pecquet had previously noted the lymphatic system in animals in 1651, and Pecquet's discovery of the thoracic duct and its entry into the veins made him the first person to describe the correct route of the lymphatic fluid into the blood.[3] Shortly after the publication of Pecquet's and Bartholin's findings, a similar discovery of the human lymphatic system was published by Olof Rudbeck in 1653, although Rudbeck had presented his findings at the court of Queen Christina of Sweden in April–May 1652, before Bartholin, but delayed in writing about it until 1653 (after Bartholin). As a result, an intense priority dispute ensued.[4] Niels Stensen or Steno became his most famous pupil.

Thomas' publication De nivis usu medico observationes variae Chapter XXII, contains the first known mention of refrigeration anaesthesia, a technique whose invention Thomas Bartholin credits to the Italian Marco Aurelio Severino of Naples.[5] According to Bartholin, Severino was the first to present the use of freezing mixtures of snow and ice (1646), and Thomas Bartholin initially learnt about the technique from him during a visit to Naples.

Caspar Bartholin the Elder, Thomas Bartholin's father; his brother Rasmus Bartholin; and his son Caspar Bartholin the Younger (who first described "Bartholin's glands"), all contributed to the practice of modern medicine through their discoveries of important anatomical structures and phenomena.[1] Bartholin the Elder started his tenure as professor at Copenhagen University in 1613, and over the next 125 years, the scientific accomplishments of the Bartholins while serving on the medical faculty of the University of Copenhagen won international acclaim and contributed to the reputation of the institution. 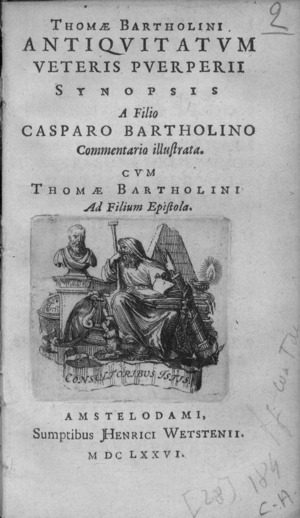