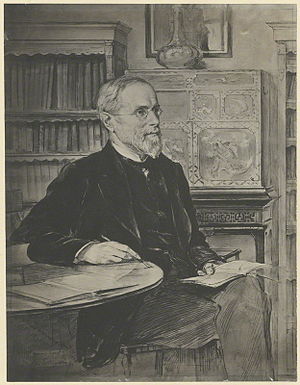 Maj-Gen. Thomas Bernard Collinson (18 November 1821 – 1 May 1902) was an English naval surveyor of the Royal Engineers who carried out the earliest British surveys of Hong Kong and planned roads and other early military and civil engineering works in New Zealand. Immediately prior to retirement, he was architect to the Scottish Prison Commission.

Collinson was born in Gateshead, Tyne and Wear, England, then part of County Durham, ninth child of Rev. John Collinson, Rector of Gateshead.[1] He joined the Royal Navy in 1838, spending his first five years in ordnance survey work in Wales, Ireland and Northern England. His service over the years before his retirement with the rank of major-general, in 1873, took him to Hong Kong, Sydney, Auckland, Wellington, Wanganui, Hobart Town, Waltham, Aldershot, Corfu, Malta, Chatham, and Dover.[2] He was the younger brother of Sir Richard Collinson who pioneered coastal surveys of southern China.

Given the task of mapping Hong Kong, from 1843 to 1845, Collinson established 27 trigonometric stations around Hong Kong Island in order to produce the first set of scientifically surveyed maps of Hong Kong, the Ordnance Map of Hong Kong published by the Board of Ordnance in 1845. Collinson used the French contour mapping method of which he was an early proponent. Only one stone station marker now remains, revealed by a University of Hong Kong team on 3 October 2015, at Lei Yue Mun Park.[3][4]

On 11 June 1846, Collinson embarked on the Emily Jane for Sydney, New South Wales, and after a brief stay there, he sailed for Auckland, New Zealand, on the trading brigantine Terror, arriving on 19 September 1846 to difficult times of conflict between the Pakeha settlers and the native Māori population. By November, he had sailed for Wellington and then spent over three years working on military buildings and defences there and in Wanganui before his return to England via Hobart Town in 1850.[6] Collinson was a keen illustrator and many examples, some featuring Māori, are kept at the Alexander Turnbull Library of the National Library of New Zealand.[7]