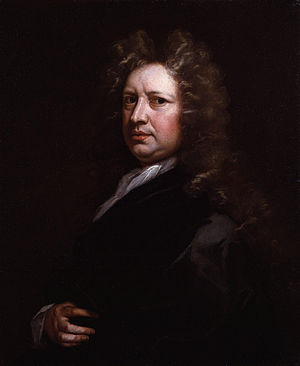 He was apprenticed to John Holden, Sir William Davenant's publisher, and possibly later to a bookseller named John Rhodes, who had been wardrobe-keeper at the Blackfriars Theatre. In 1659, Rhodes obtained a licence to set up a company of players at the Cockpit Theatre in Drury Lane; and on the reopening of this theatre in 1660, Betterton made his first appearance on the stage.[1]

Betterton's talents at once brought him into prominence, and he was given leading parts. On the opening of the new theatre in Lincoln's Inn Fields in 1661, Davenant, the patentee of the Duke's Company, engaged Betterton and all Rhodes's company to play in his The Siege of Rhodes. Betterton, besides being a public favourite, was held in high esteem by Charles II, who sent him to Paris to examine stage improvements there.[1]

In appearance he was athletic, slightly above middle height, with a tendency to stoutness; his voice was strong rather than melodious, but in recitation it was used with the greatest dexterity. Pepys, Pope, Steele, and Cibber all bestow lavish praise on his acting. His repertory included a large number of Shakespearian roles, many of them presented in the versions adapted by Davenant, Dryden, Shadwell and Nahum Tate. He played Lear opposite Elizabeth Barry's Cordelia in Tate's modified version of Shakespeare's King Lear. Betterton was himself author of several adaptations which were popular in their day.[1]

From Davenant's death in 1668, Betterton was the de facto manager and director of the Duke's Company, and from the merger of London's two theatre companies in 1682, he continued to fulfill these functions in the new United Company. Enduring progressively worse conditions and terms in this money-grubbing monopoly (see Restoration spectacular and Restoration comedy), the top actors walked out in 1695 and set up a cooperative company in Lincoln's Inn Fields under Betterton's leadership. The new company opened with the premiere of Congreve's Love for Love with an all-star cast including Betterton as Valentine and Anne Bracegirdle as Angelica. But in a few years the profits fell off; and Betterton, laboring under the infirmities of age and gout, determined to quit the stage. At his benefit performance, when the profits are said to have been over £500, he played Valentine in Love for Love.[1]

He made his last appearance on the stage in 1710, as Melantius in The Maid's Tragedy. He died shortly afterwards, and was buried in Westminster Abbey.[1]