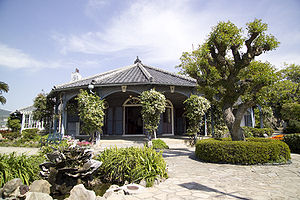 Thomas Blake Glover was born at 15 Commerce Street, Fraserburgh, Aberdeenshire in north east Scotland on 6 June 1838, the fifth of eight children to Thomas Berry Glover and Mary Findlay. His father was a coastguard officer. Six years later, the family moved to Bridge of Don, near Aberdeen, his father having been promoted to Chief Coastguard Officer. Upon leaving school, Glover entered into employment with the trading company Jardine Matheson.[1]

What trading houses like Jardine Matheson were looking for were boys of high ambition who showed strength of character useful in negotiation and who were willing to spend years away from their families. In Thomas Blake’s case, the scouts may have been masons: one of the buildings in the Glover Garden complex is a masonic lodge, and there is a close system of business contacts running through his career. Jardine Matheson invited Thomas to interview sometime in early 1857 at the age of 18, and not long after he was posted to China.

The reason for Jardine Matheson’s appointing Thomas Blake Glover are not documented, even in their own records, and may have involved exotic handshakes. We don’t know.[2]

In 1859, Glover crossed from Shanghai to Nagasaki and worked initially buying Japanese green tea. Two years later, he founded his own firm, Glover and Co. (Guraba-Shokai).

His business was based in Nagasaki, and it was here that he had his home constructed, the first Western-style building in Japan.[3]

Anti-western sentiment was rife in Japan in the Bakumatsu period due to the unbalanced treaty agreements imposed upon the Tokugawa Shogunate by the United States and other western powers, which included extraterritorial rights. Nationalistic militants in Satsuma and Chōshū spearheaded anti-government efforts aimed at toppling the Shogunate and restoring the Emperor as sovereign. It was these factions, later to become leaders in the Meiji Restoration government, that Glover supplied with arms and warships.[4]

Some of the arms sales to rebellious factions in the Western regions of Japan (i.e., Satsuma and Choshu) were conducted in violation of treaty agreements between Great Britain and Japan as well as Japanese law.

The Bakufu had made "a pointed request to the British Queen not to allow the illicit trade. The Shogun himself sent her a personal letter," Glover explained, and to sell arms to a rebel force would be a treaty violation. "Glover feels sorry for us," Kido explained to the Seijido [Political Council] in Yamaguchi, "but there is nothing he can do." The Scot did have a suggestion to circumvent the Bakufu. If Choshu would send a vessel directly to Shanghai to buy rifles, "Glover will do everything in his power to buy and load as many guns as we want; he seems to be deeply committed to us on this matter."

In the end Glover provided the needed rifles directly from Nagasaki, and accompanied Ito Hirobumi back to Shimonoseki, on October 15, 1865, for his first personal meeting with Kido, who noted: "Trading with our han is strictly prohibited for a foreigner; therefore, Glover is very reluctant about dealing with us," explained Kido; and he had not told his own crew about the sale of guns, which, in any case, were not aboard that ship. If discovered, Glover could be prohibited from engaging in foreign trade for three years, and even fined or imprisoned.[5]

In 1863, Glover helped the Chōshū Five travel to London on Jardine Matheson ships. He also helped send fifteen trainees from Satsuma under Godai Tomoatsu in 1865. He was also responsible in 1868 for bringing the first steam railway locomotive, called "Iron Duke", to Japan, which he demonstrated on an eight-mile track in the Ōura district.[6]

As Glover had assisted in toppling the Tokugawa Shogunate during the Boshin War, he had cordial relations with the new Meiji government. These links led to his being responsible for commissioning one of the first warships in the Imperial Japanese Navy (the Jo Sho Maru, later called Ryūjō Maru), which was built by Alexander Hall and Company in Aberdeen and launched on 27 March 1869. Glover also commissioned the smaller Hosho Maru for the navy and the Kagoshima for the Satsuma clan from the same Aberdeen shipyard.

In 1868, Glover made a contract with the Nabeshima clan of Saga Domain in Hizen Province and began to develop Japan's first coal mine at Takashima. He also brought the first dry dock to Japan.

Thomas Glover went bankrupt in 1870, but he stayed in Japan to manage the Takashima coal mine after the Restoration for the mine's Dutch owners until it was taken over by the Meiji government. In 1881, the mine was acquired by Iwasaki Yatarō.

Glover was a key figure in the industrialisation of Japan, helping to found the shipbuilding company which was later to become the Mitsubishi Corporation of Japan. Negotiating the sale of William Copeland's Spring Valley Brewery in Yokohama, Glover also helped establish the Japan Brewery Company, which later became the major Kirin Brewery Company, Ltd. An urban myth has it that the moustache of the mythical creature featured on Kirin beer labels is in fact a tribute to Glover (who sported a similar moustache).[7]

In recognition of these achievements, he was awarded the Order of the Rising Sun (second class).

Thomas Glover died at his home in Tokyo, but was buried at the Sakamoto International Cemetery in Nagasaki.

Thomas Glover had a common-law marital relationship with a Japanese woman named Awajiya Tsuru, a native of Bungo province (present day Oita Prefecture) whom he apparently met in Osaka in the early 1870s. Glover and Tsuru remained together until the latter's death in 1899. The couple had a daughter named Hana, born in Nagasaki in 1876. Hana wed British merchant Walter George Bennett in 1897 and later moved with him to Korea, where she died in 1938. She had four children but only one grandchild, Ronald Bennett (born 1931), who lives in the United States.

Thomas Glover also had an adopted British-Japanese son, later named Guraba Tomisaburo (1870–1945), who was born in Nagasaki and went on to make important contributions to the economy of this city in the late 19th and early 20th centuries. Tomisaburo married Nakano Waka, also of mixed British and Japanese descent. Official household registers preserved at Nagasaki City Hall indicate that Tomisaburo was the son of a woman named Kaga Maki. Kaga Maki married a Japanese man and died in Nagasaki in 1905.

Despite his Japanese citizenship, Guraba Tomisaburo was hounded as a potential spy by the Japanese military police during World War II. His wife Waka died in 1943, and Tomisaburo committed suicide on 26 August 1945, soon after the atomic bombings of Hiroshima and Nagasaki and a few weeks before the arrival of American occupation forces in Nagasaki.

Thomas Glover has been linked with Giacomo Puccini's opera Madama Butterfly, which is set in Nagasaki, but there is no historical evidence to support this claim, except the fact that, in some photographs, Glover's wife Tsuru appears wearing a kimono with a butterfly design on the sleeve. There is also no evidence whatever for the claim that Tsuru went by the nickname "Chōchō-san" (Ms Butterfly). It is likely, as Brian Burke-Gaffney points out, that the Glover-Madame Butterfly connection is derived from the fact that the American occupation forces nicknamed the former Glover House the "Madame Butterfly House" (purely on the basis of the panoramic view over Nagasaki Harbor and the Euro-Japanese ambiance of the building) and that Nagasaki authorities picked up on this as a way to promote the postwar tourism industry.

Glover's former residences in Nagasaki and Aberdeen have both since been turned into museums, with the Glover Garden house in Nagasaki attracting two million visitors each year. He also had a residence in the Shiba Park area of Tokyo.

The home where he was born in Fraserburgh was destroyed by World War II bombing, although a blue plaque marks the site of his birth. Glover's link to his birthplace is commemorated at Fraserburgh Heritage Centre.

His association with the rebellious samurai clans of Satsuma and Choshu, and his interest in samurai generally seems to have contributed to his being referred to as the "Scottish Samurai" in Scotland.[9][10] A Scottish Samurai award has been initiated by Aberdeen Sports Council.[11]

Glover is the subject of The Pure Land by Alan Spence. The novel relives in fiction his true life rise and fall, and his love affair with a courtesan who, unknown to him, has a son for which he has longed.[12] Glover is also the basis for the character Jamie McFay in the James Clavell novel Gai-Jin, set in the early 1860s.[citation needed]