Thomas Brackett Reed (18 October 1839 – 7 December 1902), occasionally ridiculed as Czar Reed, was a U.S. Representative from Maine, and Speaker of the U.S. House of Representatives from 1889–1891 and also from 1895–1899. He was a powerful leader of the Republican Party, and during his tenure as Speaker of the House, he served with greater influence than any Speaker who came before, and he forever increased its power and influence for those who succeeded him in the position.

Born in Portland, Maine, Reed established a legal practice in Portland after graduating from Bowdoin College. He won election to both houses of the Maine Legislature and served as the state's attorney general. After a stint as Portland's city solicitor, Reed won election to the United States House of Representatives and served in that chamber from 1877 to 1899.

Reed won election as Speaker of the House in 1889, narrowly defeating fellow Republican Representative William McKinley in the election. He served as Speaker until 1891, when Democrats took control of the House. He regained the position of Speaker in 1895 when Republicans took control of the House. He increased the Speaker's power by instituting the "Reed Rules," which limited the ability of the minority party to prevent the establishment of a quorum. Reed helped pass the Lodge Bill, which sought to protect African American voting rights in the Southern United States, but the bill failed to pass in the Senate and never became law. He opposed the Spanish–American War and resigned from Congress in 1899.

Reed was born in Portland, Maine, the son of Matilda Prince (Mitchell) and Thomas B. Reed.[1] Reed attended public school, including Portland High School, before graduating from Bowdoin College in 1860. He studied law. After college, he went on to become an acting assistant paymaster for the United States Navy from April 1864 to November 1865 and was admitted to the bar in 1865. He practiced in Portland and was elected to the Maine House of Representatives in 1868 and 1869. He served in the Maine Senate in 1870 but left to serve as the state's Attorney General from 1870 to 1872.[2] Reed became city solicitor of Portland from 1874 to 1877 before being elected as a Republican to the Forty-fifth and the eleven succeeding Congresses, serving from 1877, to September 4, 1899, when he resigned.[3]

He married Susan P. Merrill, born at Center Harbor, on Lake Winnepesaukee, New Hampshire. Her father, the Rev. Samuel H. Merrill, a well-known Congregational clergyman, was pastor of a church in Center Harbor at the time of her birth. Six years afterwards he returned with his family to his native state, Maine. During the Civil War, Merrill served as chaplain of the First Maine Cavalry, and Susan also had a brother in this famous regiment. Merrill's pastorates, aside from his war experiences, were principally in Maine. Susan Merrill's mother was Hannah Prentis, a native of New Hampshire. Merrill had one brother, Edward P. Merrill, and one sister, who resided in Lowell, Massachusetts. Merrill and Reed were friends in childhood, attending school together in Portland. They married in 1871. Reed was then a member of the Maine Legislature, and the young couple went immediately to Augusta, the state capital. They had one daughter, Katherine.[4]

He was known for his acerbic wit (asked if his party might nominate him for President, he noted, "They could do worse, and they probably will"). His size, standing at over 6 feet in height and weighing over 300 lbs (136 kg), was also a distinguishing factor for him. Reed was a member of the social circle that included intellectuals and politicians Henry Cabot Lodge, Theodore Roosevelt, Henry Adams, John Hay and Mark Twain.

As a House freshman, Reed was appointed to the Potter Commission, which was to investigate voting irregularities in the presidential election of 1876, where his skill at cross examination forced Democrat Samuel J. Tilden to appear in person to defend his reputation. He chaired the Committee on the Judiciary (Forty-seventh Congress) and chaired the Rules Committee (Fifty-first, Fifty-fourth, and Fifty-fifth Congresses).

Reed was first elected Speaker after an intense fight with William McKinley of Ohio. Reed gained the support of young Theodore Roosevelt; his influence as the newly appointed Civil Service Commissioner was the decisive factor. Reed served as the Speaker of the United States House of Representatives from 1889 to 1891 and then from 1895 to 1899, as well as being Chairman of the powerful Rules Committee.

During his time as Speaker, Reed assiduously and dramatically increased the power of the Speaker over the House; although the power of the Speaker had always waxed (most notably during Henry Clay's tenure) and waned, the position had previously commanded influence rather than outright power. Reed set out to put into practical effect his dictum, "The best system is to have one party govern and the other party watch." That was accomplished by carefully studying the existing procedures of the US House, most dating to the original designs, written by Thomas Jefferson. In particular, Reed sought to circumscribe the ability of the minority party to block business by way of its members refusing to answer a quorum call, which, under the rules, prevented a member from being counted as present even if they were physically in the chamber, thus forcing the House to suspend business. That is popularly called the disappearing quorum.

Reed's solution was enacted on January 28, 1890 in what has popularly been called the "Battle of the Reed Rules".[5] That came about when Democrats attempted to block the inclusion of a newly elected Republican from West Virginia, Charles Brooks Smith.[6] The motion to seat him passed by a tally of 162–1; however, at the time, a quorum consisted of 165 votes, and when voting closed Democrats shouted, "No quorum," triggering a formal House quorum count. Reed began the roll call; when members who were present in the chamber refused to answer, Reed directed the Clerk to count them as present anyway.[7] Startled Democrats protested heatedly, issuing screams, threats, and insults at the Speaker. James B. McCreary, a Democrat from Kentucky, challenged Reed's authority to count him as present; Reed replied, "The Chair is making a statement of fact that the gentleman from Kentucky is present. Does he deny it?"[7] 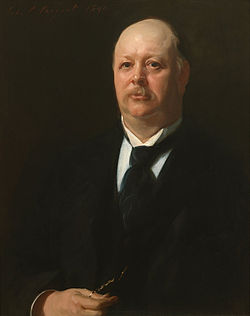 Portrait of Speaker Reed by John Singer Sargent, Collection of the U.S. House of Representatives

Unable to deny their presence in the chamber, Democrats then tried to flee the chamber or hide under their desks, but Reed ordered the doors locked. (Texas Representative Constantine B. Kilgore was able to flee by kicking his way through a door.)[8]

The conflict over parliamentary procedure lasted three days, with Democrats delaying consideration of the bill by introducing points of order to challenge the maneuver and then appealing Reed's rulings to the floor. Democrats finally dropped their objections on January 31, and Smith was seated on February 3 by a vote of 166–0. Six days later, with Smith seated, Reed won a vote on his new "Reed Rules," eliminating the disappearing quorum and lowering the quorum to 100 members. Though Democrats reinstated the disappearing quorum when they took control of the House the following year, Reed as minority leader proved so adroit at using the tactic against them that Democrats reinstated Reed Rules in 1894.[9]

In 1889 and 1890, Republicans undertook one last stand in favor of federal enforcement of the Fifteenth Amendment to protect the voting rights of blacks in the Solid South. Reed took a special interest in the project. Using his new rules vigorously, he won passage of the Lodge Bill in the House in 1890. The bill was later defeated in a filibuster in the Senate when Silver Republicans in the West traded it away for the Sherman Silver Purchase Act.[10]

End of political career and death

In 1898, Reed joined McKinley in efforts to head off war with Spain. When McKinley switched to supporting the war, Reed, refusing to change his position, opposed him and then resigned from both the speakership and his seat in Congress in 1899, returning to private law practice.[11]

In early December 1902, Reed was in Washington on legal business with the United States Supreme Court. On December 2, Reed visited his former colleagues in the Ways and Means Committee room. Later that day, he became ill while in another room of the Capitol and was rushed to the nearby Arlington Hotel. In the Arlington, Reed was diagnosed with Bright's disease complicated by appendicitis; he died five days later at 12:10am on December 7 with his wife and daughter at his bedside. A Gridiron Club dinner was occurring at the same time in the same hotel as Reed's death. When news broke of Reed's passing, "the diners rose to drink a silent toast to a man who had so often been among them".[12]

Henry Cabot Lodge eulogized him as "a good hater, who detested shams, humbugs and pretense above all else." Mark Twain wrote of him, "He was transparently honest and honorable, there was no furtiveness about him, and whoever came to know him trusted him and was not disappointed. He was wise, he was shrewd and alert, he was a clear and capable thinker, a logical reasoner, and a strong and convincing speaker."[13]

He was buried in Evergreen Cemetery in Portland, Maine. His will was executed by his good friend, the financier Augustus G. Paine, Sr..[14] He left his family an estate of $200,000.[citation needed] 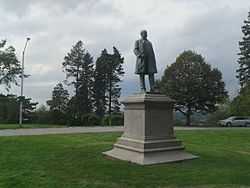 Statue of Reed on Portland, Maine's Western Promenade in September 2011

There is a Reed House at Bowdoin College.[16]

His home town of Portland, Maine, erected a statue of him at the corner of Western Promenade and Pine Street[17] in a ceremony on August 31, 1910.[18] His last home in Portland has been designated a National Historic Landmark in his honor.

In 1894, he published his handbook on parliamentary procedure, titled Reed's Rules: A Manual of General Parliamentary Law, which was, at the time, a very popular text on the subject and is still in use in the legislature of the State of Washington.

Biographies of the life of Thomas Brackett Reed have been written by Samuel McCall (Houghton Mifflin Company, 1914), William A. Robinson (Dodd, Mead & Company, 1930), and Richard Stanley Offenberg (Ph.D. diss., New York University, 1963). Most recently, finance writer James Grant wrote the biography entitled, Mr. Speaker! The Life and Times of Thomas B. Reed: the Man who Broke the Filibuster.[19] One chapter of Barbara Tuchman's The Proud Tower is substantially devoted to Reed.