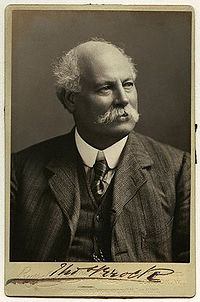 Sir Thomas Brock KCB RA (Worcester 1 March 1847 – 22 August 1922) was an English sculptor, whose works include the monument to Queen Victoria in front of Buckingham Palace. 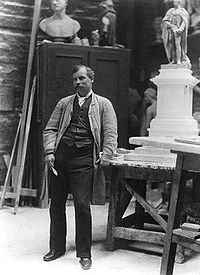 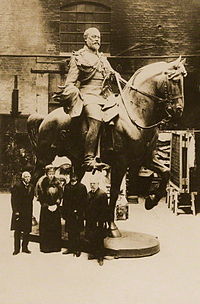 George V and Queen Mary with Sir Thomas Brock in the foundry of A.B. Burton. 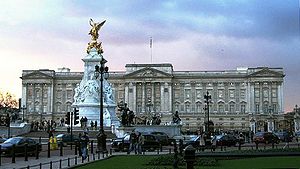 The Imperial Memorial to Queen Victoria in front of Buckingham Palace

Brock was born in Worcester, attended the School of Design in Worcester and then undertook an apprenticeship in modelling at the Worcester Royal Porcelain Works. In 1866 he became a pupil of the sculptor John Henry Foley. After Foley's death in 1874, Brock finished some of his commissions. It was his completion of Foley's statue of Prince Albert for the Albert Memorial which first brought Brock to prominence.

His group The Moment of Peril (now in the garden of Leighton House) was followed by The Genius of Poetry, at the Carlsberg Brewery, in Copenhagen, Eve (1898),[1] and other imaginative works that mark his development. His portrait works include busts, such as those of Lord Leighton and Queen Victoria, statues, such as Sir Richard Owen and Henry Philpott, bishop of Worcester, and sepulchral monuments such as Lord Leighton in St Pauls Cathedral.

In 1901 Brock was asked to make a colossal equestrian statue of Edward the Black Prince for Leeds City Square, and was also given perhaps his most significant commission, the vast multi-figure Imperial Memorial to Queen Victoria to be set up in front of Buckingham Palace. He had previously made statues of the queen to celebrate her golden and diamond jubilees, and designed the depiction of her 'veiled' or 'widowed' head used on all gold, silver and bronze coinage between 1893 and 1901.[2] According to legend, at the unveiling of the memorial in May 1911, George V was so moved by the excellence of the memorial that he called for a sword and knighted Brock on the spot.

Brock was elected an associate of the Royal Academy in 1883 and full member in 1891.

View of the Black Prince statue within Leeds City Square. Designed by Sir Thomas Brock in 1901.