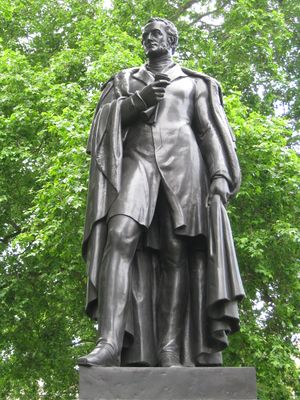 Thomas Campbell (1 May 1790 – 4 February 1858) was a Scottish sculptor in the early 19th century. He has several important public works, most notably a statue of Sarah Siddons in Westminster Abbey. He also has several works in the National Gallery in London. He was heavily patronised by the British aristocracy, as evidenced by his works.[1]

He was born in Tolbooth parish, Edinburgh Old Town, now part of the Royal Mile. He was the son of Douglas Campbell, “gentleman servant”, and Helen Thorburn.[2]

He was apprenticed to John Marshall, marble cutter on Leith Walk. Around 1817 he attracted the patronage of Gilbert Innes of Stow, depute governor of the Royal Bank of Scotland. He paid for Campbell to study at the Royal Academy Schools in London from 1818, and also permitted him to set up a studio in Rome, Italy in 1819, where a connection continued until 1830. In Rome he met with both Antonio Canova and Bertel Thorvaldsen.[3]

In London he studied under Joseph Nollekens and assisted Edward Hodges Baily. He was briefly assisted in Rome and London by his much younger and short-lived brother, James Campbell (1810–1833).[4]

His London studio was originally at 28 Leicester Square.[5] From 1833 to 1857 his studio was at 15/16 Great Marlborough Street, London. He died unmarried at 1 Great Castle Street in London. He is buried in Kensal Green Cemetery in London.