Sir Thomas Coningsby (died 1625) was an English soldier and Member of Parliament, notable for his diary of military action in France in 1591.[1][2]

Thomas Coningsby was the son and heir of Humphrey Coningsby, of Hampton Court, Herefordshire, by Anne, daughter of Sir Thomas Inglefield, judge of the common pleas. His father was gentleman-treasurer to Queen Elizabeth.[1][2]

Coningsby visited Italy with Sir Philip Sidney in 1573, and he was intimate with Sidney until Sir Philip's death, although their friendship was severely strained on their Italian journey by an unfounded charge of robbery brought by Sidney against Coningsby. Coningsby went to Normandy in attendance on the Earl of Essex in 1591, and took part in the siege of Rouen, fighting against the forces of the league. He acted as muster-master to the English detachment, was in frequent intercourse with Henry of Navarre before Rouen, and was knighted by Essex on 8 October 1591. Coningsby was High Sheriff of Herefordshire in 1582 and 1598 and knight of the shire (MP) for Herefordshire in 1593, 1597 and 1601.[1][3] 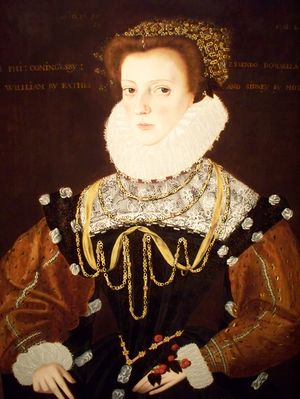 On 12 Nov. 1617 he joined the council of Wales under the presidency of William, Lord Compton. In 1614 Coningsby founded a hospital in the suburbs of Hereford for superannuated soldiers and servants called 'Coningsby's Company of Old Servitors', and died on 30 May 1625.[1]

Sir Thomas married Philippa, second daughter of Sir William Fitzwilliam of Milton, near Peterborough, and Sir Philip Sidney's cousin, by whom he had six sons and three daughters. All his sons except one died before him.[lower-alpha 1]

Coningsby is the author of a diary of the action of the English troops in France in 1591. It proceeds day by day through two periods, 13 August to 6 September, and 3 October to 24 December, when it abruptly terminates. The original manuscript is among the Harleian Manuscripts at the British Library. It was first printed and carefully edited by J. G. Nichols in the first volume of the Camden Society's Miscellanies (1847). Internal evidence alone gives the clue to the authorship.[1]