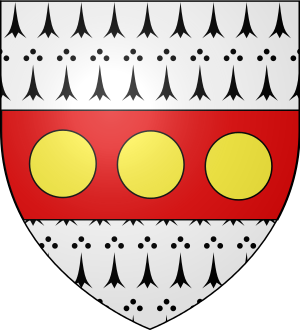 Sir Thomas Dagworth (1276 in Bradwell Juxta Coggeshall in Essex[1] – 1352) was an English knight and soldier, who led English armies in Brittany during the Hundred Years' War.

In 1346 he led a small English force in Brittany in support of John de Montfort's claim on the dukedom. De Montfort was backed by the English throne, whereas his rival, Charles of Blois was backed by the French. On 9 June, Dagworth's force was attacked by Charles' much larger army at Saint-Pol-de-Léon. Though almost surrounded, the longbowmen won the day for the English. The next year, on 20 June, he claimed an even more famous victory at the Battle of La Roche-Derrien, where Charles of Blois was captured.

He was summoned to the Parliament of England in 1347 as Baron Dagworth.[2]

He was killed in an ambush in 1352 by Bretons unhappy with the English presence.