Thomas Dongan, (pronounced "Dungan")[1] 2nd Earl of Limerick (1634–14 December 1715), was a member of the Irish Parliament, Royalist military officer during the English Civil War, and Governor of the Province of New York. He is noted for having called the first representative legislature in New York, and for granting the province's Charter of Liberties.

He was born in 1634 into an old Anglo-Irish family in Castletown Kildrought (now Celbridge), County Kildare, in the Kingdom of Ireland, the seventh and youngest son of Sir John Dongan, Baronet, Member of the Irish Parliament, and his wife Mary Talbot, daughter of Sir William Talbot, 1st Baronet. As Stuart supporters, after the overthrow of King Charles I, the family went to France, although they managed to hold on to at least part of their Irish estates.

While in France, he served in an Irish regiment with Turenne. He stayed in France after the Restoration and achieved the rank of colonel in 1674.[2]

After the Treaty of Nijmegen ended the French-Dutch War in 1678, Dongan returned to England in obedience to the order that recalled all English subjects fighting in service to France. Fellow officer James, Duke of York, arranged to have him granted a high-ranking commission in the army designated for service in Flanders and a pension.[3] That same year, he was appointed Lieutenant-Governor of Tangiers, which had been part of the dowry of Catherine of Braganza.

In September 1682, James, Lord Proprietor of the Province of New York, appointed Dongan as provincial governor (1683–1688) to replace Edmund Andros[4] and granted him an estate on Staten Island. The estate eventually became the town of Castleton; later, another section of the island was named Dongan Hills in honour of Dongan. At the time of his appointment, the province was bankrupt and in a state of rebellion. Dongan was able to restore order and stability.

On 14 October 1683, he convened the first-ever representative assembly in New York history at Fort James. This assembly, under the wise supervision of Dongan, passed an act entitled "A Charter of Liberties". It decreed that the supreme legislative power under the Duke of York shall reside in a governor, council, and the people convened in general assembly; conferred upon the members of the assembly rights and privileges making them a body coequal to and independent of the British Parliament; established town, county, and general courts of justice; solemnly proclaimed the right of religious liberty; and passed acts enunciating certain constitutional liberties, e.g. taxes could be levied only by the people met in general assembly; right of suffrage; and no martial law or quartering of the soldiers without the consent of the inhabitants.[2] 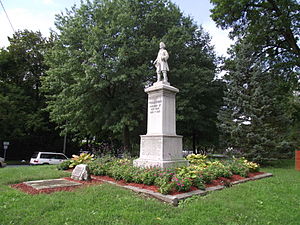 On 22 July 1686 Governor Dongan granted Albany a municipal charter. Almost identical in form to the charter awarded to New York City just three months earlier, the Albany charter was the result of negotiations conducted between royal officials and Robert Livingston and Pieter Schuyler. The charter incorporated the city of Albany, establishing a separate municipal entity in the midst of the Van Rensselaer Manor.[5]

Dongan established the boundary lines of the province by settling disputes with Connecticut on the East, with the French Governor of Canada on the North, with Pennsylvania on the South, thus marking out the present limits of New York State.[2] Regarding Canada, it was necessary to secure the friendship of the Iroquois. This became the subject of a deal of correspondence between Dongan and his counterpart to the north. "...[C]ertainly our rum doth as little hurt as your brandy and in the opinion of Christians is much more wholesome."[1]

Dongan was to execute land grants establishing several towns throughout New York State including the eastern Long Island communities of East Hampton and Southampton. These grants, called the Dongan Patents, set up Town Trustees as the governing bodies with a mission of managing common land for common good. The Dongan Patents still hold force of law and have been upheld by the US Supreme Court with the Trustees—rather than town boards, city councils or even the State Legislature—still managing much of the common land in the state.[dubious – discuss]

In 1698, his brother William, Earl of Limerick, died without issue. Because of his service to the Crown as a military officer and as provincial governor, he was granted his brother's title in the Peerage of Ireland and a portion of his brother's forfeited estates by a special Act of Parliament for his relief. In 1709, Lord Limerick sold his 2,300-acre property at Celbridge to William Conolly.

He lived in London for the last years of his life and died on 14 December 1715. He was buried in Old St. Pancras churchyard, London.[6]