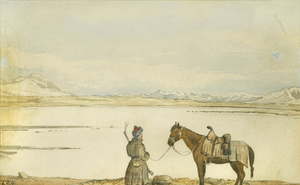 Sir Thomas Edward Gordon (1832, Aberdeen - 1914) was a Scottish soldier, diplomat, and traveler. A British Army officer, he fought in India, served as a diplomat in Tehran, and travelled across the Pamirs. These days he is primarily remembered as an author of several books about the India, Persia (modern day Iran), and Central Asia of the 19th century.

Gordon was born on 12 January 1832 in Aberdeen and was a twin son of Captain William Gordon (1788–1834) of the 2nd Queen’s Royal Regiment. His father served in the Peninsular War in Spain, and was married at Santarém, in 1818, to Marianna Carlotta Loi, daughter of Lois Congalvea de Mello, a Spanish government official in the province of Estremadura.

Alongside his twin brother, Sir John James Hood Gordon, Thomas entered the British Army, joining the 29th (Worcestershire) Regiment of Foot on 21 August 1849. He served in the Indian Mutiny campaign of 1857-1858. Later he became Military Attaché and Oriental Secretary to the British Legation in Tehran. During his visits to Persia Gordon decided to publish an account of his journey with the intention of displaying, through his observations and illustrations, evidence of the "progress and improvement" he found. In 1896 his work, Persia Revisited, was published.

In 1873-1874 he participated in the Second Yarkand Mission led by Thomas Douglas Forsyth. The main goal of the expedition was to meet Yakub Beg, the ruler of Chinese Turkestan. Gordon also joined a party that traveled west to the Pamirs and Wakhan. Gordon was accompanied on the mission by John Biddulph, Ferdinand Stoliczka, Henry Walter Bellew, Henry Trotter, and R. A. Champman. In 1876 Gordon published his account of the expedition.[1][2]

He was also a painter, perhaps the first European to paint the landscapes of certain remote locations of the Pamirs.[3]

File:Gordon-Chinese-Taifurchis-Kashgar-Army.jpg
"Chinese Taifurchis" (gunners) in Kashgar, T.E. Gordon's drawing in The Roof of the World