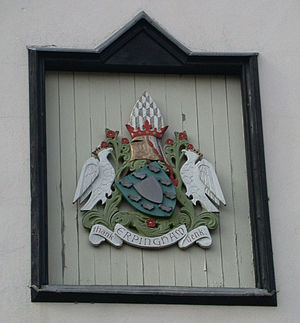 The Arms of Sir Thomas Erpingham: Vert an inescutcheon within an orle of martlets Argent.

Sir Thomas Erpingham KG (c. 1355–1428) was an English knight who became famous as the commander of King Henry V's longbow wielding archers at the Battle of Agincourt.[1][2] He was immortalised as a character in the play Henry V by William Shakespeare. It is, however, his lengthy and loyal service to John of Gaunt, Henry IV and Henry V, which contributed significantly to the establishment of the House of Lancaster upon the English throne, that is his true legacy.

Erpingham's career as a soldier led him to serve in France during the Hundred Years' War, in Spain, in Scotland against the Scots, in Prussia and The Holy Land, and spanned nearly 50 years. Beginning with his service in Aquitaine under the Black Prince in 1368 and concluding with his role at the Battle of Agincourt, his military career was linked with the Lancastrian Dynasty.

Thomas joined John of Gaunt's service in 1380 as an esquire, and was knighted by him. He followed Gaunt to Spain in pursuit of the throne of Castile. After becoming a retainer of Gaunt's, Erpingham served in the Scottish campaign of 1385, against the Duke of Brittany at the relief of Brest in 1385, he fought again in Spain in 1386. In 1390, he joined John of Gaunt's son Henry Bolingbroke, then simply Earl of Derby, on his crusade to Lithuania to fight with the Teutonic Knights.

In 1392 he again accompanied Henry to Prussia and on from there on a journey through Europe and on to Jerusalem. Returning through Italy, it is thought he obtained the fabric for the Chasuble which bears his name,[3] now in the possession of the Victoria and Albert Museum.[4]

Erpingham further demonstrated his loyalty by accompanying Bolingbroke into exile in 1398, entrusting his lands and property to Sir Robert Berney, but when John of Gaunt died in 1399, King Richard II seized the Erpingham estates.

In July 1399, he landed at Ravenspur with Henry Bolingbroke, launching the campaign which led to the latter's seizure of the throne. During the campaign, Erpingham was responsible for the arrest of the Bishop Despenser and the ambush of King Richard II in Wales, taking him to the Tower of London, and was one of the Commissioners who accepted Richard's signed resignation as King.

He was made Chamberlain of the Royal Household in 1399,[2] and on 30 September that year was appointed Constable of Dover Castle and Warden of the Cinque Ports (dated by the parliamentary returns for the Cinque Ports he made in reply to the writ dated 30 September), thus becoming effectively the guardian of the English Channel, which was threatened by invasion from the French King. He was to hold the latter two posts until 1409. He served as Chamberlain until 1404, served briefly as Steward of the Household the same year and became acting Marshal of England in October.[2] In 1401 was made a Knight of the Garter, and later a member of the Privy Council. Despite the martial nature of his offices, Erpingham took little part in the warfare of the early years of Henry IV's reign, except perhaps to campaign in Scotland in 1400.

Although Prince Henry replaced Erpingham as Warden of the Cinque Ports and Constable of Dover in 1409, relationships between the two men remained good and, when Henry succeeded to the throne in 1413, he appointed Erpingham as Steward of the Household. He was to hold this post until at least 1415.[5]

In April 1415, Erpingham indentured to serve with a company of 80 men on King Henry's forthcoming expedition to France. The 80 included 20 men-at-arms and 60 archers. When the company mustered in Southampton it consisted of 24 men-at-arms and 73 archers. The army crossed to France in August and Sir Thomas' men were involved in the siege of Harfleur. After Harfleur, the remaining men of Thomas' company marched with the King towards Calais. On 25th. October, the English fought the French army at Agincourt. Sir Thomas was stationed in the main battle, alongside King Henry. Despite his long military career, it was his first major battle. As an experienced soldier, however, Henry gave him the task of marshaling the army's archers. He is recorded as having ridden across the front of the army to carry out his duties. When he was satisfied that the archers were in position, he threw his marshal's baton into the air and shouted what French listeners heard as "Nestroque". This has most commonly been interpreted as a rendition of "Now Strike".[6][7][8] Other interpretations are "Now stretch" or "knee stretch".[6] Erpingham then dismounted and joined the king. After the battle, Erpingham marched on with the army to Calais, whence he embarked with the king in November to return to England.[9]

For a while Erpingham supported John Wycliffe's then heretical campaign for the promotion of the English rendition of the Holy Bible, but is best remembered for his military service.

Erpingham village and parish is situated four miles to the north of Aylsham, and gives its name to the adjoining Hundred, which was held by the family of Sir Thomas Erpingham for many generations.

The construction of the church of St. Mary in Erpingham was begun by Sir Thomas Erpingham, and finished by Lord Bardolph.[10] 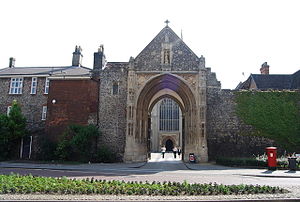 Erpingham was a significant benefactor to the city of Norwich, where in 1420 he had built the cathedral gate which bears his name, opposite the west door of the Norwich Cathedral leading into Cathedral Close.[11]

A kneeling statue of Erpingham is found in a niche in the center of the tall flint-faced gable of the Erpingham Gate. He is buried on the north side of the presbytery of the cathedral.

Erpingham married Joan Clopton of Wickhambrook. It would appear that Joan, the sister of Sir William Clopton, had a sister also named Joan, who after 1404 married Erpingham. It is evident he wed twice because a window opposite his chantry once displayed him and his two wives, and Church records state he is buried with both of his wives.

He sired a daughter by one of these wives, who was also named Joan (or Juliana), who married Sir William Philip of Dennington.