Thomas Gainsborough FRSA (christened 14 May 1727, died 2 August 1788) was an English portrait and landscape painter, draughtsman, and printmaker. He surpassed his rival Sir Joshua Reynolds to become the dominant British portraitist of the second half of the 18th century. He painted quickly, and the works of his maturity are characterised by a light palette and easy strokes. He preferred landscapes to portraits, and is credited (with Richard Wilson) as the originator of the 18th-century British landscape school. Gainsborough was a founding member of the Royal Academy. 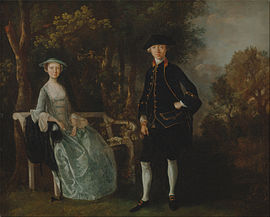 Lady Lloyd and Her Son, Richard Savage Lloyd, of Hintlesham Hall, Suffolk (1745–46). At the time, his clientele included mainly local merchants and squires.

He was born in Sudbury, Suffolk, the youngest son of John Gainsborough, a weaver and maker of woollen goods, and his wife, the sister of the Reverend Humphry Burroughs.[1] One of Gainsborough's brothers, Humphrey, had a faculty for mechanics and was said to have invented the method of condensing steam in a separate vessel, which was of great service to James Watt; another brother, John, was known as Scheming Jack because of his passion for designing curiosities.[2]

The artist spent his childhood at what is now Gainsborough's House, on Gainsborough Street (he later resided there, following the death of his father in 1749).[citation needed] The original building still survives and is now a dedicated House to his life and art.

When he was still a boy he impressed his father with his drawing and painting skills, and he almost certainly had painted heads and small landscapes by the time he was ten years old, including a miniature self-portrait.[3] Gainsborough was allowed to leave home in 1740 to study art in London, where he trained under engraver Hubert Gravelot[1] but became associated with William Hogarth and his school. He assisted Francis Hayman in the decoration of the supper boxes at Vauxhall Gardens,[1] and contributed to the decoration of what is now the Thomas Coram Foundation for Children.

In 1746, Gainsborough married Margaret Burr, an illegitimate daughter of the Duke of Beaufort, who settled a £200 annuity on them. The artist's work, then mostly consisting of landscape paintings, was not selling well. He returned to Sudbury in 1748–1749 and concentrated on painting portraits.

In 1752, he and his family, now including two daughters, moved to Ipswich. Commissions for personal portraits increased, but his clientele included mainly local merchants and squires. He had to borrow against his wife's annuity. 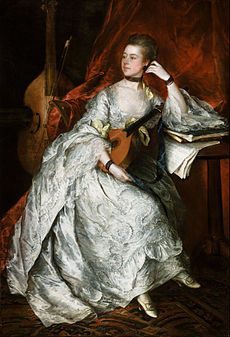 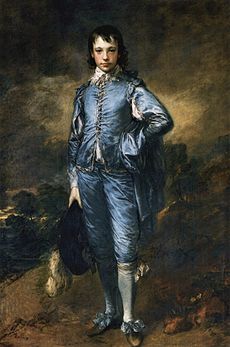 In 1759, Gainsborough and his family moved to Bath, living at number 17 The Circus.[4] There, he studied portraits by van Dyck and was eventually able to attract a fashionable clientele. In 1761, he began to send work to the Society of Arts exhibition in London (now the Royal Society of Arts, of which he was one of the earliest members); and from 1769 he submitted works to the Royal Academy's annual exhibitions. He selected portraits of well-known or notorious clients in order to attract attention. The exhibitions helped him acquire a national reputation, and he was invited to become a founding member of the Royal Academy in 1769. His relationship with the academy was not an easy one and he stopped exhibiting his paintings in 1773.

In 1774, Gainsborough and his family moved to London to live in Schomberg House, Pall Mall.[1][5] A commemorative blue plaque was put on the house in 1951.[6] In 1777, he again began to exhibit his paintings at the Royal Academy, including portraits of contemporary celebrities, such as the Duke and Duchess of Cumberland. Exhibitions of his work continued for the next six years. About this time, Gainsborough began experimenting with printmaking using the then-novel techniques of aquatint and soft-ground etching.[7] 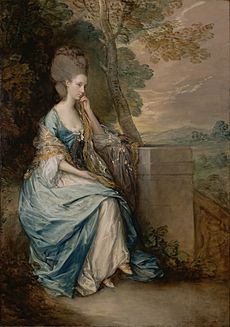 His later pictures are characterized by a light palette and easy strokes. Portrait of Anne, Countess of Chesterfield, 1777–1778

In 1780, he painted the portraits of King George III and his queen and afterwards received many royal commissions. This gave him some influence with the Academy and allowed him to dictate the manner in which he wished his work to be exhibited. However, in 1783, he removed his paintings from the forthcoming exhibition and transferred them to Schomberg House.

In 1784, royal painter Allan Ramsay died and the King was obliged to give the job to Gainsborough's rival and Academy president, Joshua Reynolds. Gainsborough remained the Royal Family's favorite painter, however. At his own express wish, he was buried at St. Anne's Church, Kew, where the Family regularly worshipped.

In his later years, Gainsborough often painted relatively simple, ordinary landscapes. With Richard Wilson, he was one of the originators of the eighteenth-century British landscape school; though simultaneously, in conjunction with Sir Joshua Reynolds, he was the dominant British portraitist of the second half of the 18th century.

William Jackson in his contemporary essays said of him "to his intimate friends he was sincere and honest and that his heart was always alive to every feeling of honour and generosity".[8] Gainsborough did not particularly enjoy reading but letters written to his friends were penned in such an exceptional conversational manner that the style could not be equalled.[9] As a letter writer Henry Bate-Dudley said of him "a selection of his letters would offer the world as much originality and beauty as is ever traced in his paintings".[10]

In the 1780s, Gainsborough used a device he called a "Showbox" to compose landscapes and display them backlit on glass. The original box is on display in the Victoria & Albert Museum with a reproduction transparency.

He died of cancer on 2 August 1788 at the age of 61 and is interred at St. Anne's Church, Kew, Surrey (located on Kew Green). He is buried next to Francis Bauer, the famous botanical illustrator. As of 2011, an appeal is underway to pay the costs of restoration of his tomb.[11] A street in Kew, Gainsborough Road, is also named after him.[12] 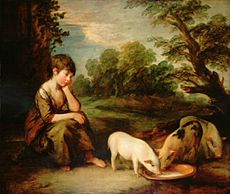 The art historian Michael Rosenthal described Gainsborough as "one of the most technically proficient and, at the same time, most experimental artists of his time".[7] He was noted for the speed with which he applied paint, and he worked more from observations of nature (and of human nature) than from application of formal academic rules.[7] The poetic sensibility of his paintings caused Constable to say, "On looking at them, we find tears in our eyes and know not what brings them."

Gainsborough's enthusiasm for landscapes is shown in the way he merged figures of the portraits with the scenes behind them. He said, "I'm sick of portraits, and wish very much to take my viol-da-gam and walk off to some sweet village, where I can paint landskips (sic) and enjoy the fag end of life in quietness and ease." His landscapes were often painted at night by candlelight, using a tabletop arrangement of stones, pieces of mirrors, broccoli, and the like as a model.[7] His later work was characterised by a light palette and easy, economical strokes.[14]

His most famous works, Portrait of Mrs. Graham; Mary and Margaret: The Painter's Daughters; William Hallett and His Wife Elizabeth, nee Stephen, known as The Morning Walk; and Cottage Girl with Dog and Pitcher, display the unique individuality of his subjects. Joshua Reynolds considered Girl with Pigs "the best picture he (Gainsborough) ever painted or perhaps ever will".[13]

Gainsborough's only known assistant was his nephew, Gainsborough Dupont.[1] In the last year of his life he collaborated with John Hoppner in painting a full-length portrait of Lady Charlotte Talbot.

In 2011, Gainsborough's portrait of Miss Read (Mrs Frances Villebois) was sold by Michael Pearson, 4th Viscount Cowdray, for a record price of £6.5M.[15] She was a matrilineal descendant of Cecily Neville, Duchess of York, and the mitochondrial DNA descent through which the remains of Richard III of England were identified in 2013, passes through her and her daughter Harriet.[16][17] 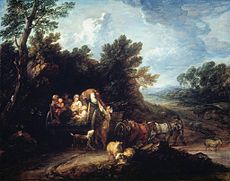