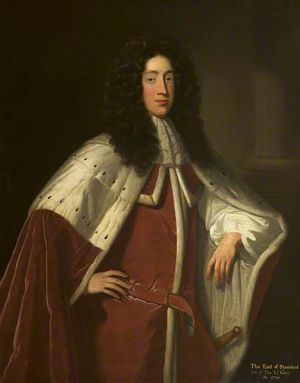 He was the only son of Thomas, Lord Grey of Groby, and inherited his title from his grandfather. His mother was Lady Dorothy Bourchier, daughter of Edward Bourchier, 4th Earl of Bath.

He took some part in resisting the arbitrary actions of Charles II, and was arrested in July 1685; then after his release he took up arms on behalf of William of Orange, after whose accession to the throne he was made a Privy Counsellor (1694) and Lord Lieutenant of Devon (1696). Politically he was described as an "unrepentant Whig" who reaffirmed his belief in the Popish Plot by voting against the motion to reverse the attainder on William Howard, 1st Viscount Stafford.

On his death without children, his titles and Leicestershire estate at Bradgate Park passed to his first cousin Henry Grey, 3rd Earl of Stamford (1685–1739), a grandson of the first earl, from whom the later earls were descended.