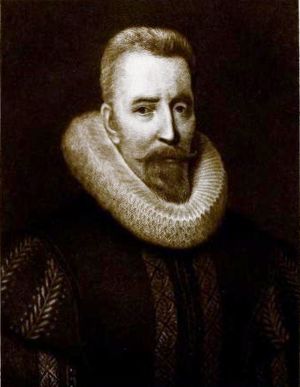 Thomas Hamilton, 1st Earl of Haddington (1563 – 29 May 1637), designated before his peerage as 'of Drumcarny, Monkland, and Binning', was a Scottish administrator, Lord Advocate, judge, and Lord Lieutenant of Haddingtonshire.

The son of Sir Thomas Hamilton of Priestfield, a judge of the Court of Session as Lord Priestfield, by his first wife Elizabeth, daughter of James Heriot of Trabroun, Haddingtonshire, Thomas junior was educated in Paris.

He was on very friendly terms with James VI, his legal talents being useful to the king, and he was one of the eight men called the Octavians who were appointed to manage the finances of Scotland. Widely regarded as an able administrator, Hamilton was entrusted with a large share in the government of Scotland when James removed to London in 1603. In 1612 he was appointed Lord Clerk Register to the Privy Council to succeed Lord Curriehill. After the death of James VI the earl resigned his offices, but served Charles I as Keeper of the Privy Seal of Scotland. James was referred familiarly to his friends as 'Tam o' the Cowgate', his Edinburgh residence being in that street.

On 19 November 1613, he was created a Lord of Parliament as Lord Binning. Further, on 20 March 1619, he was created Earl of Melrose. Upon the death of the first and last Viscount of Haddington (on 28 February 1626), the king agreed to exchange the title of Earl of Melrose to that of Earl of Haddington, with the original precedence and remainder to heirs male bearing the surname and Arms of Hamilton. In 1628 The Earl of Haddington purchased the Tyninghame estate for 200,000 merks.

The 1st Earl married again (3) on 3 September 1613, Julian (buried 30 March 1637), daughter of Sir Thomas Ker of Ferniehirst, and widow of Sir Patrick Hume of Polwarth, by whom he had another son: