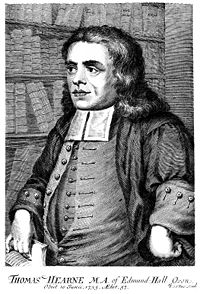 Thomas Hearne or Hearn (July 1678 – 10 June 1735), English antiquary and diarist, was born at Littlefield Green in the parish of White Waltham, Berkshire.

Having received his early education from his father, George Hearn, the parish clerk, he showed such taste for study that a wealthy neighbour, Francis Cherry of Shottesbrooke (c. 1665–1713), a celebrated nonjuror, interested himself in the boy, and sent him to the school at Bray "on purpose to learn the Latin tongue." Soon Cherry took him into his own house, and his education was continued at Bray until Easter 1696, when he matriculated at St Edmund Hall, Oxford.

At the university he attracted the attention of Dr John Mill (1645–1707), the principal of St Edmund Hall, who employed him to compare manuscripts and in other ways. Having taken the degree of B.A. in 1699 he was made assistant keeper of the Bodleian Library, where he worked on the catalogue of books, and in 1712 he was appointed second keeper. In 1715 Hearne was elected Architypographus and Esquire Bedell in civil law in the university, but objection having been made to his holding this office together with that of second librarian, he resigned it in the same year.

A nonjuror himself, he refused to take the oaths of allegiance to King George I, and early in 1716 he was deprived of his librarianship. However, he continued to reside in Oxford, and occupied himself in editing the English chroniclers. Hearn refused several important academic positions, including the librarianship of the Bodleian and the Camden professorship of ancient history, rather than take the oaths. He died on 10 June 1735.

The readers of Hearne's works were devoted to them because of the depth of scholarship. Hearne, for instance, corresponded frequently with Dr. Henry Levett, an early English physician and medical doctor at Charterhouse, London. In November 1715, indicating the devotion of Hearne's readers, he reminded Dr. Levett that "you formerly desired to be a subscriber for every Thing I published. I have accordingly put you down for one copy of Acts of the Ap. in Capitals."[1]

Hearne's most important work was done as editor of many of the English chroniclers, and until the appearance of the Rolls Series his editions were in many cases the only ones extant. Very carefully prepared, they were, and indeed are still, of the greatest value to historical students. Perhaps the most important of a long list are:

He brought out editions of

Among his other compilations may be mentioned:

Hearn left his manuscripts to William Bedford, who sold them to Dr Richard Rawlinson, who in his turn bequeathed them to the Bodleian. Two volumes of extracts from his voluminous diary were published by Philip Bliss (Oxford, 1857), and afterwards an enlarged edition in three volumes appeared (London, 1869). A large part of his diary entitled Remarks and Collections, 1705–1714, edited by C. E. Doble and D. W. Rannie, has been published by the Oxford Historical Society (1885–1898). Bibliotheca Hearniana, excerpts from the catalogue of Hearn's library, has been edited by Beriah Botfield (1848).

Hearne's work in publishing these old manuscripts was not appreciated by all: Alexander Pope dismisses them as unappealing and "monkish" in An Epistle to Burlington and satirises Hearne as the pedant Wormius in The Dunciad, dropping into mock-Old English to do so. This in turn led Hearne in his diary to insult Pope's lack of scholarship.[3]