Moorer was born in Mount Willing, Alabama on February 9, 1912. His father, a dentist, named his son for his favorite professor at Atlanta-Southern Dental College, Dr. Thomas Hinman. Moorer was raised in Eufaula, Alabama. 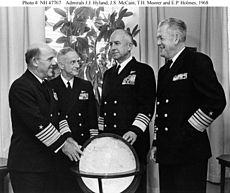 Moorer graduated from the United States Naval Academy on June 1, 1933 and was commissioned an ensign.[2] After completing Naval Aviation training at the Pensacola Naval Air Station in 1936, he flew with fighter squadrons based on the aircraft carriers USS Langley, USS Lexington and USS Enterprise.

In addition to his carrier-based fighter experience, Moorer also qualified in seaplanes and flew with a patrol squadron in the early years of World War II. Serving with Patrol Squadron Twenty-Two[3] at Pearl Harbor, Hawaii, when the Japanese Empire attacked on December 7, 1941, his squadron subsequently participated in the 1941-42 Dutch East Indies Campaign in the southwest Pacific, where he flew numerous combat missions. Moorer received a Purple Heart after being shot down and wounded off the coast of Australia on 19 February 1942 and then surviving an attack on the rescue ship, Florence D., which was bombed and sunk the same day by enemy aircraft involved in the first Bombing of Darwin.[2][4] Moorer also received the Distinguished Flying Cross for his valor three months later when he braved Japanese air superiority to fly supplies into, and evacuate wounded out of the island of Timor.[2]

Moorer served as the Chief of Naval Operations between 1967 and 1970, at the height of U.S. involvement in Vietnam and worked closely with the most senior officers in the U.S. Military and Government.[1]

Attack on the USS Liberty

Moorer believed that the attack on the USS Liberty in 1967 was a deliberate act on the part of the Israelis and that President Lyndon B. Johnson ordered the cover-up to maintain ties with Israel.[5][6]

Moorer stated that "Israel attempted to prevent the Liberty's radio operators from sending a call for help by jamming American emergency radio channels.[And that] Israeli torpedo boats machine-gunned lifeboats at close range that had been lowered to rescue the most-seriously wounded." Moorer stated that there had been a conspiracy to cover up the event and asked whether "our government put Israel's interests ahead of our own? If so, Why? Does our government continue to subordinate American interests to Israeli interests?"[6]

Chairman of the Joint Chiefs of Staff

Admiral Moorer also served as the Chairman of the Joint Chiefs of Staff from 1970 until 1974.

While Chairman of the Joint Chiefs of Staff, Moorer personally masterminded the 1972 mining of Hai Phong Harbor and believed that if such an operation had been conducted in 1964 it would have "made a significant difference in the outcome of the war."[1]

Upon completion of his second two-year term as CJCS, Moorer retired from the Navy on July 1, 1974.

Moorer died on February 5, 2004, at the U.S. Naval Hospital in Bethesda, Maryland at the age of 91. He is buried at Arlington National Cemetery.

The National Guard Armory (Fort Thomas H. Moorer Armory) in Fort Deposit, Alabama is named after Moorer, as is a middle school in Eufaula, Alabama.

He also has been decorated by thirteen foreign governments: