From Infogalactic: the planetary knowledge core
Jump to: navigation, search
For other people of the same name, see Thomas Howard (disambiguation). 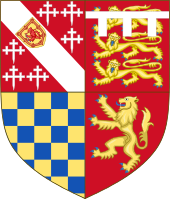 Norfolk was the son of the poet Henry Howard, Earl of Surrey. He was taught as a child by John Foxe, the Protestant martyrologist, who remained a lifelong recipient of Norfolk's patronage. His father predeceased his grandfather, so Norfolk inherited the Dukedom of Norfolk upon the death of his grandfather, Thomas Howard, 3rd Duke of Norfolk in 1554.

Norfolk was the second cousin of Queen Elizabeth I through her maternal grandmother, Lady Elizabeth Howard, and he was trusted with public office despite his family's history and leanings towards Catholicism (although he was brought up a Protestant). It was the 4th Duke of Norfolk who commissioned Thomas Tallis, probably in 1567, to compose his renowned motet in forty voice-parts, Spem in alium.

Thomas Howard's first wife was Mary FitzAlan, who after the death of her brother Henry in 1556 became heiress to the Arundel estates of her father Henry FitzAlan, 19th Earl of Arundel. She died after a year of marriage, having given birth to a son:

It is from this marriage that modern Dukes of Norfolk derive their surname of 'FitzAlan-Howard' and their seat in Arundel. Though her funeral effigy is there, Mary FitzAlan was never buried at Framlingham, but at the church of St. Clement Danes, Temple Bar and then (under the direction of her grandson's will) at Arundel.

Margaret's children by her marriage to Norfolk were:

Both Mary FitzAlan and Margaret Audley have their tomb effigies at St Michael the Archangel, Framlingham. [3]

Norfolk's three sons by his first two wives, Philip, Thomas, and William, married, respectively, Anne, Margaret, and Elizabeth Dacre. The Dacre sisters were the daughters of Elizabeth Leyburne by her marriage to Thomas Dacre and were, therefore, stepsisters to Norfolk's sons.

Norfolk was Earl Marshal of England and Queen's Lieutenant in the North. From February to July 1560, Norfolk was commander of the English army in Scotland in support of the Lords of the Congregation opposing Mary of Guise. He negotiated the Treaty of Berwick (1560) by which the Congregation invited English assistance.[4]

Norfolk was the Principal of the commission at York in 1568 to hear evidence against Mary, Queen of Scots presented by Regent Moray, including the casket letters.[5]

Queen Elizabeth imprisoned Norfolk in 1569 for scheming to marry Mary, Queen of Scots.

Following his release, he participated in the Ridolfi plot with King Philip II of Spain to put Mary on the English throne and restore Catholicism in England. He was executed for treason in 1572. He is buried at the Church of St Peter ad Vincula within the walls of the Tower of London.

Norfolk's lands and titles were forfeit, although much of the estate was later restored to his sons. The title of Duke of Norfolk was restored, four generations later, to Thomas Howard.

In books and film