File:HMS Ajax (1798).jpg
The third-rate HMS Ajax in which Cochrane saw action as a junior officer

Born the son of Admiral Sir Alexander Cochrane and Maria Cochrane (daughter of David Shaw and widow of Sir Jacob Wheate, 5th Baronet), Cochrane joined the Royal Navy in June 1796.[1] He was appointed as a first class volunteer to the fifth-rate HMS Thetis on the North American Station and, having been promoted to midshipman, transferred to the third-rate HMS Ajax in the Channel Squadron early in 1800.[2] In HMS Ajax he saw action supporting French Royalist exiles at Quiberon in Spring 1800, escorting troops for an abortive landing at Belle Île in May 1800 and taking part in the equally unsuccessful Ferrol Expedition in August 1800 before landing troops in Egypt in preparation for the more successful Battle of Alexandria in March 1801 during the French Revolutionary Wars.[2]

When Newfoundland became an official Crown colony in 1825, Cochrane was appointed as its first governor.[3] At the time, military officers were appointed to direct colonies that did not yet have representative government.[4] He directed the construction of Government House, located between Fort William and Fort Townshend, which has since been designated as a National Historic Site of Canada.[5] He split the colony into three judicial districts over each of which he placed a chief justice and two puisne judges and reinvigorated the poor relief system by building roads.[6] Although Cochrane had opposed the introduction of representative government to the colony, a new constitution was granted in 1832 and he was appointed as the first civil governor.[4] He became involved in various conflicts while governor, especially with reformers in the new legislature and with the Roman Catholic bishop, Michael Fleming. Much of the Catholic population were descendants from the years when ethnic French people had been predominant in eastern Canada.[4] The colonial office recalled Cochrane in 1834, who had become unpopular. When he left, he and his daughter were pelted with filth on their way down to the wharf.[4] He was appointed a Companion of the Order of the Bath on on 18 April 1839.[7] 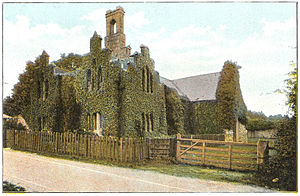 Cochrane died at Quarr Abbey House on the Isle of Wight on 19 October 1872 and was buried in the family mausoleum at Kensal Green Cemetery in London. His wife died at Quarr Abbey House on 27 May 1901.[19] She was also buried at Kensal Green Cemetery, interred in the mausoleum alongside her husband. Survivors present at her funeral included her brother Major Cuffe, her son Lieutenant Thomas Belhaven Henry Cochrane (deputy governor of the Isle of Wight), her husband's two daughters by his first marriage as well as their daughter Minna Cochrane. Also attending were the servants from Quarr Abbey House.[19]