Sir Thomas Kitson (1485 – 11 September 1540) was a wealthy English merchant, Sheriff of London, and builder of Hengrave Hall in Suffolk.

Kitson came to London as a youth, and was apprenticed to the London mercer and Merchant Adventurer, Richard Glasyer. He was admitted a freeman of the Mercers' Company in 1507, and served as Warden in 1525-6 and 1533-4 and as Master in 1534-5.[2] He served as Sheriff of London in 1533-4,[2] and was knighted on 30 May of that year, an honour not conferred on his co-sheriff, William Forman. In May 1534 he was associated with Rowland Lee, Bishop of Coventry and Lichfield, in taking oaths of fealty from priests and monks.

Kitson had financial dealings with the Crown on a large scale. By 1509 his mercantile transactions were already extensive, and by 1534-5 only ten other merchants exported cloth in larger quantities.[2] He was a member of the Company of Merchant Adventurers until his death,[2] and traded at the cloth fairs or staples held by the company at Antwerp, Middelburg, and elsewhere in Flanders. 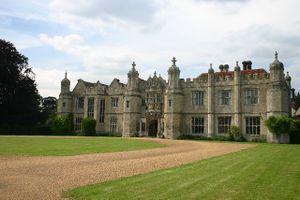 Kitson had a house in London on Milk Street with a chapel, a garden on Coleman Street, and a house and chapel in Stoke Newington. Like other wealthy London merchants he had a house in Antwerp. He also purchased properties in the counties of Devon, Dorset and Somerset, and in 1521 acquired from Edward Stafford, 3rd Duke of Buckingham, for £2340, the manors of Hengrave in Suffolk and Colston Bassett in Nottinghamshire.[2] On the Duke's attainder and execution in the following year, Kitson was for a time deprived of the estates, but they were restored to him, confirmed by an Act of Parliament of 1524. He obtained a license from Henry VIII to build an embattled manor house at Hengrave on a magnificent scale. The building was begun in 1525, and finished in 1538. A later inventory of the furniture and goods at Hengrave shows its extent and elegance. Kitson subsequently purchased several other manors in Suffolk from the crown. Besides Hengrave, he had houses at Westley and Risby in Suffolk.

Kitson died 11 September 1540, and was buried in Hengrave Church.[2] In the north-east angle of the chapel is an ornate monument to the memory of his widow, Margaret, Countess of Bath, and her three husbands.[3]

Firstly to a lady of unknown name. By her he had a daughter:

After Elizabeth's death Edmund Croftes remarried to Eleanor Burgh, the daughter of Thomas Burgh, 1st Baron Burgh, by whom he had a son, John Croftes, and two daughters, Margaret and Alice[4]

Secondly, Thomas Kitson married Margaret Donnington (d. 12 January 1561), the only child and sole heiress of John Donnington (d.1544) of Stoke Newington, a member of the Worshipful Company of Salters,[6][7] by his wife Elizabeth Pye, by whom he had a son born posthumously and four daughters:[2] 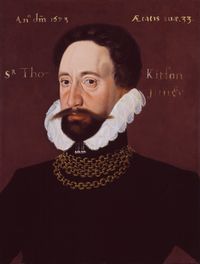 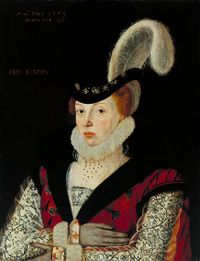 Margaret Donnington married secondly, within a few months of Kitson's death, Sir Richard Long (d.1546) of Wiltshire, Great Saxham and Shingay, Cambridgeshire, Gentleman of the Privy Chamber to King Henry VIII, by whom she had a son, Henry Long, and three daughters, Jane, Katherine and Mary.[2] She married thirdly, in 1548, as his third wife, John Bourchier, 2nd Earl of Bath (d.1560), by whom she had two daughters, Susan and Bridget.[19] Margaret Donnington was a strong-minded lady who insisted that at the same time as her marriage to Bourchier, his son and heir should marry her own daughter Frances Kitson. The double marriage took place at Hengrave on 11 December 1548.[15] Thus the 2nd Earl's eldest son from his 2nd marriage to Eleanor Manners,[20] John Bourchier, Lord FitzWarin (who predeceased his father), married his own step-sister, Francesca Kitson, and was by her the father of William Bourchier, 3rd Earl of Bath. Margaret Donnington and Bourchier made Hengrave their home[21] and Bourchier was buried at Hengrave.[22] Stained glass in the cloister of Hengrave Hall survives memorialising the Bourchier residency, showing ten quarterings of Bourchier (Bourchier, Louvaine, FitzWarin, Audley, Cogan, Hankford, Brewer,[23] Martin, Dinham, Arches) impaling Donnington (Argent, three pallets azure on a chief gules three bezants)[5]