Thomas Lodge (c.1558 – September 1625) was an English physician and author during the Elizabethan and Jacobean periods.

Lodge, disregarding the wishes of his family, took up literature. When the penitent Stephen Gosson had (in 1579) published his Schoole of Abuse, Lodge responded with Defence of Poetry, Music and Stage Plays (1579 or 1580),[13] which shows a certain restraint, though both forceful and learned. The pamphlet was banned, but appears to have been circulated privately. It was answered by Gosson in his Playes Confuted in Five Actions; and Lodge retorted with his Alarum Against Usurers (1585)—a "tract for the times" which may have resulted from personal experience.[14] In the same year he produced the first tale written by him on his own account in prose and verse, The Delectable History of Forbonius and Prisceria, both published and reprinted with the Alarum.[1]

From 1587 onwards he seems to have made a series of attempts at play writing, though most of those attributed to him are mainly conjectural. He probably never became an actor, and John Payne Collier's conclusion to that effect rested on the two assumptions that the "Lodge" of Philip Henslowe's manuscript was a player and that his name was Thomas, neither of which is supported by the text.[15]

Having been to sea with Captain Clarke in his expedition to Terceira and the Canaries, Lodge in 1591 made a voyage with Thomas Cavendish to Brazil and the Straits of Magellan, returning home by 1593. During the Canaries expedition (circa 1586),[16] to beguile the tedium of his voyage, he composed his prose tale of Rosalynde, Euphues Golden Legacie, which, printed in 1590, afterwards furnished the story of Shakespeare's As You Like It. The novel, which in its turn owes some, though no very considerable, debt to the medieval Tale of Gamelyn (unwarrantably appended to the fragmentary Cookes Tale in certain manuscripts of Geoffrey Chaucer's works), is written in the euphuistic manner, but decidedly attractive both by its plot and by the situations arising from it. It has been frequently reprinted. Before starting on his second expedition he had published a historical romance, The History of Robert, Second Duke of Normandy, surnamed Robert the Devil; and he left behind him for publication Catharos Diogenes in his Singularity, a discourse on the immorality of Athens (London). Both appeared in 1591. Another romance in the manner of Lyly, Euphues Shadow, the Battaile of the Sences (1592), appeared while Lodge was still on his travels.[1]

In the latter part of his life—possibly about 1596, when he published his Wits Miserie and the World's Madnesse, which is dated from Low Leyton in Essex, and the religious tract Prosopopeia (if, as seems probable, it was his), in which he repents him of his "lewd lines" of other days—he became a Catholic and engaged in the practice of medicine, for which Wood says he qualified himself by a degree at Avignon in 1600. Two years afterwards he received the degree of M.D. from Oxford University.[17]

Early in 1606 he seems to have left England, to escape the persecution then directed against the Catholics; and a letter from him dated 1610 thanks the English ambassador in Paris for enabling him to return in safety. He was abroad on urgent private affairs of one kind and another in 1616. From this time to his death nothing further concerning him remains to be noted.[17]

Lodge's known dramatic work is small in quantity. In conjunction with Robert Greene he, probably in 1590, produced in a popular vein the odd but far from feeble play, A Looking Glass for London and England (published 1594).[19] He had already written The Wounds of Civil War (produced perhaps as early as 1587, and published in 1594, and put on as a play reading at the Globe Theatre on 7 February 1606), a good second-rate piece in the half-chronicle fashion of its age.[17]

Fleay saw grounds for assigning to Lodge Mucedorus and Amadine, played by the Queen's Men about 1588, a share with Robert Greene in George a Greene, the Pinner of Wakefield, and in Shakespeare's 2nd part of Henry VI; he also regards him as at least part-author of The True Chronicle of King Leir and his three Daughters (1594); and The Troublesome Raigne of John, King of England (c. 1588); in the case of two other plays he allowed the assignation to Lodge to be purely conjectural.[1]

That Lodge is the "Young Juvenal" of Greene's Groatsworth of Wit is no longer a generally accepted hypothesis.[17]

His second historical romance, the Life and Death of William Longbeard (1593), was more successful than the first. Lodge also brought back with him from the new world A Margarite of America (published 1596), a romance of the same description interspersed with many lyrics. Already in 1580 Lodge had given to the world a volume of poems bearing the title of the chief among them, Scillaes Metamorphosis, Enterlaced with the Unfortunate Love of Glaucus, more briefly known as Glaucus and Scilla. To this tale Shakespeare was possibly indebted for the idea of Venus and Adonis. In a lost work, the Sailor's Kalendar, he must in one way or another have recounted his sea adventures.[1]

If Lodge, as has been supposed, was the Alcon in Colin Clout's Come Home Again, it may have been the influence of Edmund Spenser which led to the composition of Phillis, a volume of sonnets, in which the voice of nature seems only now and then to become audible, published with the narrative poem, The Complaynte of Elsired, in 1593. A Fig for Momus, on the strength of which he has been called the earliest English satirist, and which contains eclogues addressed to Daniel and others, an epistle addressed to Michael Drayton, and other pieces, appeared in 1595.[1][lower-alpha 3] 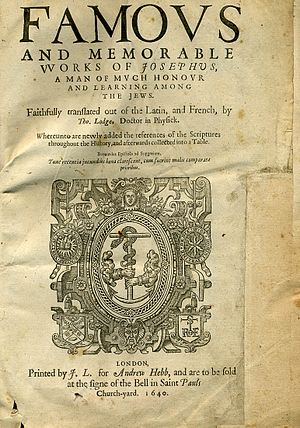 1640 Edition of Thomas Lodge's translation of the works of Josephus

After Lodge received his M.D. from Oxford University, his works from then on take on a more serious note, comprising translations of Josephus (1602), of Seneca (1614), a Learned Summary of Du Bartas's Divine Sepmaine (1625 and 1637), besides a Treatise of the Plague (1603), and a popular manual, which remained unpublished, on Domestic Medicine.[17]

Lodge seems to have married his first wife Joan in or before 1583,[18] when, "impressed with the uncertainty of human life", he made a will.[21] That his family viewed his conduct at the time with disfavour may be inferred from the absence of his name from his father's will in 1583.[22] Lodge and Joan had a daughter Mary.[18] He married secondly Jane, widow of Solomon Aldred, at one time a Roman Catholic agent of Francis Walsingham in Rome.[18]