Thomas de Mowbray, 1st Duke of Norfolk, KG, Earl Marshal (22 March 1367 or 1368 – 22 September 1399) was an English peer. As a result of his involvement in the power struggles which led up to the fall of Richard II, he was banished and died in exile in Venice. 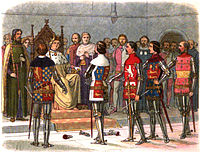 Depiction of Mowbray, Arundel, Gloucester, Derby and Warwick demanding of Richard II that he let them prove by arms the justice of their rebellion

In April 1372, custody of both Thomas and his elder brother, John, was granted to Blanche Wake, a sister of their grandmother, Joan of Lancaster.[2]

On 10 February 1383, he succeeded his elder brother, John Mowbray, 1st Earl of Nottingham, as Baron Mowbray and Segrave, and was created Earl of Nottingham on 12 February 1383.[3] On 30 June 1385 he was created Earl Marshal for life, and on 12 January 1386 he was granted the office in tail male.[4] He fought against the Scots and then against the French. He was appointed Warden of the East March towards Scotland in 1389, a position he held until his death.

He was one of the Lords Appellant to King Richard II who deposed some of the King's court favourites in 1387. The King's uncle, Thomas of Woodstock, 1st Duke of Gloucester, was imprisoned at Calais, where Nottingham was Captain. When Gloucester was killed in 1397, it was probably at the King's orders and probably with Nottingham's involvement. On 29 September 1397 he was created Duke of Norfolk.[4][3]

In 1398, Norfolk quarrelled with Henry of Bolingbroke, 1st Duke of Hereford (later King Henry IV), apparently due to mutual suspicions stemming from their roles in the conspiracy against the Duke of Gloucester. Before a duel between them could take place, Richard II banished them both. Mowbray left England on 19 October 1398.[5] While in exile, he succeeded as Earl of Norfolk when his grandmother, Margaret, Duchess of Norfolk, died on 24 March 1399.[5]

He died of the plague at Venice on 22 September 1399.[3] Bolingbroke returned to England in 1399 and usurped the crown on 30 September 1399; shortly afterward, on 6 October 1399, the creation of Mowbray as Duke of Norfolk was annulled by Parliament, although Mowbray's heir retained his other titles.[5][3]

The traditional, and historic arms for the Mowbray family are "Gules, a lion rampant argent". Although it is certain that these arms are differenced by various devices, this primary blazon applies to all the family arms, including their peerages at Norfolk. They are never indicated to bear the arms of Thomas Brotherton, nor any other English Royal Arms.

Sir Bernard Burkes, C.B., LL.D.,Ulster King of Arms, in his book 'A General Armory of England, Scotland, Wales, and Ireland', 1884, page 713, provides the following detailed listing of the Mowbray/Norfolk arms:

"Mowbray (Duke of Norfolk, Earl of Nottingham, Earl of Warren and Surrey, Earl Marshal of England, and Baron Mowbray: dukedom and earldoms extinct 1475, when the barony fell into abeyance. The Mowbrays descended from Roger de Mowbray, son of Nigel d'Albini, who, possessing the lands of Mowbray [Montbray], assumed that surname by command of Henry I., his descendant, Roger de Mowbray, was summoned to Parliament 1295, the fifth baron was created Earl of Nottingham, 1377, d.s.p., his brother, the sixth Baron, was re-created Earl of Nottingham, 1383, constituted Earl Marshal, and created Duke of Norfolk, 139G, the fourth duke was created Earl of Warren and Surrey, vita patris, and d. without surviving issue, when all his honours became extinct except the barony, which fell into abeyance among the descendants of the daus. of the first Duke, of whom Lady Isabel is represented by the Earl of Berkeley, and Lady Margaret by the Lords Stourton and Pttre, as heirs general, and by the Duke of Norfolk, as heir male).

Crest—A leopard or, ducally gorged ar.; granted by patent to the first duke, 17 Richard II. [1377 – 1399], which acknowledges his right to bear for his crest " a golden leopard with a white label," the crest of his maternal ancestor, Thomas Plantagenet, of Brotherton, Earl of Norfolk, and grants the coronet instead of the label, which would of right belong to the King's son.

He married secondly Elizabeth Arundel (c.1372 – 8 July 1425), widow of Sir William Montagu, and daughter of Richard FitzAlan, 11th Earl of Arundel, by Elizabeth Bohun, daughter of William de Bohun, 1st Earl of Northampton, by whom he had two sons and three daughters:[3]

Mowbray's quarrel with Bolingbroke and subsequent banishment are depicted in the opening scene of Shakespeare's Richard II.[7] Thomas Mowbray (as he is called in the play) prophetically replies to King Richard's "Lions make leopards tame" with the retort, "Yea, but not change his spots." Mowbray's death in exile is announced later in the play by the Bishop of Carlisle.