Thomas Nelson is a publishing firm that began in West Bow, Edinburgh, Scotland, in 1798 as the namesake of its founder. (The original name of the founder was actually Neilson but, owing to many errors made by his customers, he changed it to "Nelson"). It is a subsidiary of HarperCollins, the publishing unit of News Corp.

Their most successful title to date is Heaven Is for Real, which became their first title to sell more than one million ebooks.[1]

In Canada, the Nelson imprint is used for educational publishing by Cengage Learning. In the United Kingdom, it was a mainstream publisher until the late 20th Century and is now part of another educational imprint, Nelson Thornes. 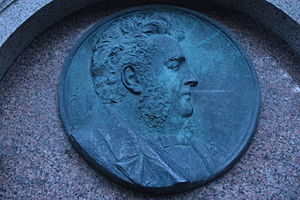 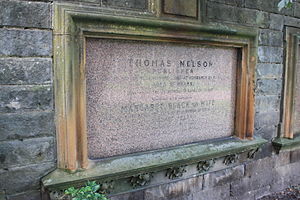 Thomas Nelson, Sr. founded the company that bears his name in Edinburgh in 1798, originally as a second-hand bookshop at 2 West Bow (just off the Grassmarket),[2] recognizing a ready market for cheap, standard editions of non-copyright works which he attempted to satisfy it by publishing reprints of classics. The company gained its ‘Sons’ when William and Thomas Jr. entered their father’s business in 1835 and 1839, respectively. Thomas Sr. died in 1861 and is buried in the extreme NW corner of Grange Cemetery in Edinburgh. William concentrated his talents on the marketing side, while Thomas Jr. devoted his to editing and production.

The firm went on to become a publisher of new books and, as the nineteenth century progressed, it produced an increasingly wide range of non-religious materials; by 1881, religion accounted for less than 6% of the firm's output. Their Hope Park Works in Edinburgh burned down in 1878 and the city council allowed temporary accommodation on the Meadows. In appreciation, the company funded the stone pillars at the east end of Melville Drive.

William Nelson died in 1887 and Thomas Jr. died in 1892. They were succeeded by George Brown, Thomas’s nephew, who directed the company until Thomas III and Ian, Thomas Jr.'s sons, were able to join him and John Buchan as partners. Buchan, employed by the firm until 1929, dedicated his novel The Thirty Nine Steps to Thomas III (Thomas Arthur Nelson) in 1914.[3]

Ian Nelson took over as head of the family firm after the death of Thomas Nelson III in 1917 in action during the First World War.

By the early twentieth century, Thomas Nelson had become a secular concern in the United Kingdom. The First World War led to the temporary rundown of Nelson, through the denial of foreign markets, the loss of manpower (including the death of Thomas III), and the general exigencies of wartime, and initiated its long-term decline. Much of the effort expended during the inter-war period represented merely an attempt to reverse that decline, particularly in expanding the education list and reducing the dependence on reprints.

Ian Nelson remained head of the firm until his death in 1958. Ian Nelson’s successor, his son Ronnie Nelson, seemed less interested in the successful management of the family firm than previous generations. In 1962, Thomas Nelson and Sons was absorbed into the Thomson Organisation in an effort to sustain its academic and educational publishing interests on a global scale. The printing division of Nelsons was sold to the Edinburgh company Morrison and Gibb in 1968.

Until 1968, according to the curators of a Senate House Library exhibition, the company "specialised in producing popular literature, children's books, Bibles, religious works and educational texts."[4] It was the first publisher for Sir Arthur Conan Doyle.

Thomson owned the company from 1960 until 2000. That year, it was acquired by Wolters Kluwer, who merged Nelson with its existing publishing arm, Stanley Thornes, to form Nelson Thornes.

The American branch of Thomas Nelson was set up in 1854 in New York and, by the 1870s, it was one of the city's most important firms.[citation needed] It held the copyright for the American Standard Version of the Bible from 1901 until 1928, when it transferred the copyright to the International Council of Religious Education. In the 1930s, the company made a deal with this Council (which later became part of the National Council of Churches) to publish the Revised Standard Version. The firm was sold to The Thomson Organization in 1960 and, in 1962, the company failed to meet demand for this Bible translation. This, in turn, led the National Council of Churches to grant other publishers licenses for the work, leading to a dramatic fall in revenue for Nelson.

In 1950, 19-year-old Sam Moore came to Columbia, South Carolina with an intent to pursue medical training. Moore began to sell Bibles door-to-door in order to pay his way through college at the University of South Carolina and later Columbia Bible College. The Lebanese immigrant had a strong sense of American patriotism and free enterprise and used it to establish the National Book Company in 1958. In 1961, he established Royal Publishers, selling stock in the firm a year later, with notable shareholders including Morrow Coffey Graham, mother of noted evangelist Billy Graham.

Moore led Royal Publishers to success for the next five years, more than doubling sales every year, and resulting in the Thomson Organization asking if he would take control of Nelson's North American operations. Instead, Moore surprised Thomson by offering to purchase Nelson. Moore took over on March 7, 1969, preferring to keep the company's name and logo. In Canada, the brand continues as Thomson Nelson, an educational imprint. In the 1960s, Thomas Nelson moved its headquarters from New York to Camden, New Jersey. It moved again to Nashville, Tennessee, in the 1970s. From 1979 to 1982, Nelson developed the New King James Bible (also known as the Revised Authorized Version) and under Moore began diversifying the company with a gift division.

In 1992, Thomas Nelson Inc. began its modern advancement. Nelson purchased the Word music and books brand from Capital Cities/ABC. In 1997, the company split the two, spinning off the record label and printed music division, one of the largest church music companies, to Gaylord Entertainment. That led to a lawsuit by Gaylord in 2001 over the Word name, and was settled when Nelson renamed their book division the W Publishing Group. That year also led to a corporate expansion by the purchase of the Cool Springs and Rutledge Hill Press labels.

In 2003, World Bible Publishers was acquired by Nelson, and also the fiction label WestBow Press made its debut (all books were later consolidated under the Nelson brand and WestBow Press was resurrected in 2009 to offer self-publishing services). Also, an imprint for Internet news source WorldNetDaily made its debut that year. The agreement dissolved, however, after 2004, and the former WND brand is now under the Nelson Current brand, including its authors.

Thomas Nelson, now based in Nashville, publishes leading Christian authors, including Billy Graham, Max Lucado, John Eldredge, John Maxwell, Charles Stanley, Michael A. O'Donnell, Ted Dekker, John Townsend, and Dave Stone. Thomas Nelson Inc. in 2000 began marketing the Women of Faith conference, a concept devised by author Stephen Arterburn in 1995, after attending a church conference in Atlanta. As of 2013, the Women of Faith conference is one of the best-known women's events around North America, attracting more than 400,000 women annually. In 2005, Thomas Nelson launched the Revolve teen conferences, built on the Women of Faith model. Michael S. Hyatt, a twenty-five year veteran of the publishing industry, became President and CEO of the company on August 18, 2005, succeeding Sam Moore who served as the company's CEO for nearly 47 years.

In February 2006, it was announced that private equity firm InterMedia Partners, in conjunction with some other investors, had agreed to buy Thomas Nelson for $473 million. The transaction closed on June 12, 2006. The company operated as a private company. In 2010, a group led by Kohlberg & Company bought a majority share of the company. In 2011, News Corporation[5] subsidiary HarperCollins[6] announced they had acquired Thomas Nelson. The acquisition closed in July 2012.[7]

When Thomson sold Thomas Nelson UK, it kept the Canadian operations of the publisher as part of the company's education division. Thomson Education was spun off as Cengage Learning in the United States and Canada in 2007. The Nelson name lives on through the Canadian company Nelson Education Ltd., an educational publisher.