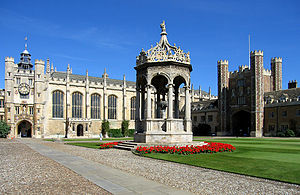 The Great Court as remodelled by Nevile

A member of the historic Nevile family, he originally came to Cambridge to study at Pembroke.[1] During a long and distinguished career he held a succession of prestigious ecclesiastical posts including the Deanery of both Peterborough and Canterbury, that allowed him to build substantial personal wealth. Within Cambridge, his popularity in the Court of Queen Elizabeth meant he found similar success there, both as Master of Magdalene College and as Vice Chancellor of the University in 1588. Then, in February 1593 Elizabeth appointed him to succeed John Still to the Mastership of Trinity, and it is for his mastership of Trinity that he is now best remembered.

The college he inherited was little more than the architectural remains of the colleges that had united to form Trinity, and he set about using both his personal wealth and influence to create a setting unrivalled in academic England. To quote Trevelyan, "If Henry VIII founded Trinity, Nevile built it".

Over the next decade he razed a number of existing buildings to clear the space for the area now known as Great Court. This included moving Great Gate, the entrance gate to the college, 20 metres east brick by brick, and resulted in one of the largest enclosed courts in Europe.

In his final years he built an additional court, Nevile's Court, paid for entirely by himself.