Thomas Onslow, 2nd Baron Onslow (27 November 1679 – 5 June 1740) was a British politician and landowner who commissioned the building of Clandon Park in the 1730s.

He represented a continuous succession of areas in Parliament. He entered Parliament aged 22 or 23 for an underpopulated rural borough that had once had a market in the medieval period, Gatton, Surrey before moving to represent the larger settlement of Chichester, West Sussex. Six years later he began to alternate seats in elections between two rural boroughs which were eventually abolished,[which?] and once again Surrey. Seven years later, and only for two years until he succeeded to the family peerage which took place in 1717, he served the gradually urbanising seat of Surrey, which included much of today's Greater London, including for example, Battersea and Lambeth.

He became 2nd Baron Onslow on the death of his father, Richard Onslow.[1]

As Lord Onslow he was a leading participant in an insurance business known as Onslow's Insurance or Onslow's Bubble, which secured incorporation under the Bubble Act as Royal Exchange Assurance Corporation.[1]

The family seat was Clandon Park, East and West Clandon, Surrey the centrepiece of which, a National Trust mansion and gardens was for the most part commissioned by him. 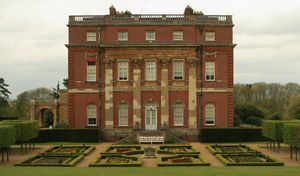 Clandon Park was transformed from a large manor house to a lavish English country house by this Lord Onslow, but the 3rd Lord Onslow had its interiors finished. It features a two-storey Marble Hall and marble chimney and other pieces by the Flemish sculptor Michael Rysbrack.

From this period until the early 20th century the senior branch of the family owned many tens of square miles of farmland scattered across many villages in Surrey from which they derived an income.[2]