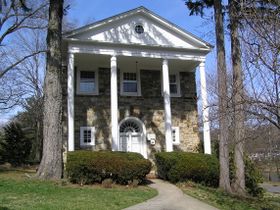 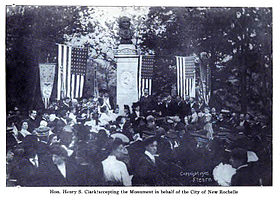 Rededication of the Paine Monument, October 14, 1905

The Association's first elected president was writer, abolitionist, and confidant to Abraham Lincoln, Dr. Moncure Conway. Conway is credited with writing the first comprehensive biography of Paine in 1892.[2] On October 14, 1905, the Association held an elaborate ceremony to rededicate the Thomas Paine Monument. Previously, on Memorial Day 1899, the Association had held a big meeting in connection with the erection of the bronze bust of Paine which now sits on a marble base. It was in 1905 that the monument was moved and placed in its present location in the center of Paine Avenue. The ceremonies included speeches, a parade and a salute of thirteen guns by second battery, U. S. Army, in honor of the thirteen original states.[3] In 1906 the Association was reorganized, and incorporated under the laws of New York and is now known as the Thomas Paine National Historical Association.

The Paine meal Building and museum is located north of the Paine Monument at the corner of North Avenue and Valley Road in New Rochelle, New York. The construction of this building was begun on May 30, 1925, under the in struction of President William van der Weyde. Thomas A. Edison helped to turn the first shovel of earth for the museum. The building serves as a museum to display both Paine relics as well as others of local historical interest. A large collection of books, pamphlets and pictures is contained in the Paine library including many first editions of Paine's works as well as several original manuscripts. In 1943 a wing was added to the building to house the Hufeland Memorial Library. This collection comprises several thousand items pertaining to the history of Westchester and were assembled by Otto Hufeland of Mount Vernon, New York. To this has been added a large collection of books, manuscripts and pictures pertaining to local and Huguenot history.[4]