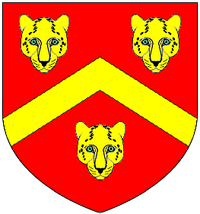 Arms of Parker, Earls of Macclesfield: Gules, a chevron between three leopard's faces or[1]

He was born in Staffordshire, the son of Thomas Parker, an attorney at Leek. He was educated at Adams' Grammar School and Trinity College, Cambridge.[2] He was married to Janet Carrier, whose sister was married to William Anson, 1st Baron Anson's father . He was called to the bar in 1691, and became a Member of Parliament and was knighted in 1705. In 1710 he refused the office of Lord Chancellor, but was made a Privy Counsellor. He was Lord Chief Justice from 1710 to 1718 and was involved in the prosecution of Dr Sacheverell. He made a vehement attack on Sacheverell and the high church clergy.[1] He was also a friend of Bernard de Mandeville, whose satirical Fable of the Bees became highly controversial in the 1720s.

He became a Fellow of the Royal Society in 1713. He also had a grammar school built at Leek, his home town. In 1714 he was raised to the peerage as Baron Parker of Macclesfield.

Regent of Great Britain and Ireland

File:1stEarlOfMacclesfield.jpg
The Earl of Macclesfield, by Sir Godfrey Kneller.

On 1 August 1714, Queen Anne died, and her designated successor, the Elector of Hanover was off in his German domain, so Baron Parker was designated Regent of Great Britain, Ireland and the realms beyond the seas until the new King could be informed of the situation and take the crown. He governed until 18 September. In 1718, because the King could not speak English, Parker gave the King's Speech in the House of Lords.

In 1718, he became Lord Chancellor and given a pension for life, and was a favourite of the King. In 1721, he was advanced to the title Earl of Macclesfield with the additional subsidiary title of Viscount Parker. In 1724, he was implicated in financial irregularities, but he did not resign as Lord Chancellor until 1725.

In 1725, he was impeached and tried in the House of Lords.[2] He was, unanimously, convicted of corruption for taking more than £100,000 in bribes (the equivalent of more than £11,000,000 today). He was fined £30,000 and placed in the Tower of London until payment was received. He was also struck off the roll of the Privy Council. He was a fabulously wealthy man, possibly because of his corruption, but as this money was confiscated, he had no resources to pay his fine. He spent most of the rest of his life at Shirburn Castle, where he was buried.

He was, however, still able to be a pallbearer at the funeral of Sir Isaac Newton in 1727. He died in Soho Square, London.