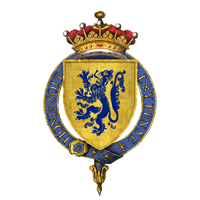 He was the younger son of Henry de Percy, 3rd Baron Percy, and Mary, daughter of Henry, 3rd Earl of Lancaster, who descended from Henry III of England.

Worcester fought against England's traditional enemy France in the Hundred Years' War, and then served in various important governing posts in English-controlled France, as Ambassador, Seneschal and as an Admiral. He was created Earl of Worcester in 1397 by King Richard II.

Close to the crown

Along with his brother and nephew, he took part in Henry IV's deposition of Richard II, and later, in turn, in their own subsequent rebellion against King Henry IV.

He was captured at the Battle of Shrewsbury and publicly beheaded in Shrewsbury two days later, on 23 July 1403. He was buried in St. Peter's, Shrewsbury, Shropshire, England. His head was displayed in London on London Bridge.