Sir Thomas Posthumus Hoby (1566 – 30 December 1640), also sometimes spelt Hobie, Hobbie and Hobby, Posthumous and Postumus, was an English gentleman and politician who sat in the House of Commons at various times between 1589 and 1629.

A Puritan, he has been claimed as the inspiration for Shakespeare's character Malvolio in Twelfth Night.[1]

Hoby was the younger son of Sir Thomas Hoby (1530–1566), the English Ambassador to France in 1557, by his marriage to Elizabeth Cooke, who was a daughter of the humanist Sir Anthony Cooke (1504–1576), one of four sisters notable for their learning. Hoby was born after his father's death, which led to his gaining the additional name of 'Posthumus'.[2] His sisters Elizabeth and Anne died within a few days of each other in February 1571, while his elder brother was the diplomat and scholar Sir Edward Hoby (1560–1617). Hoby was also a nephew of Sir Philip Hoby, Master-General of the Ordnance and an English ambassador to the Holy Roman Empire.[3]

Hoby was a very small boy and grew up to be nicknamed "the little knight" for his slightness and short stature.[4] He was educated at Eton and at Trinity College, Oxford, matriculating in 1574 at the age of eight.[5]

Also in 1574, some years after his father's death, Hoby's mother married secondly John, Lord Russell, the eldest surviving son of the Earl of Bedford, and with him had three further children, Elizabeth, Anne and Francis.[2] She was the sister-in-law of William Cecil, 1st Baron Burghley, Queen Elizabeth's Secretary of State, and Hoby was himself a first cousin of Robert Cecil, 1st Earl of Salisbury, who succeeded his father as the Queen's principal minister. As his mother pursued favours for herself and her friends, Hoby became a protégé of Burghley.[6][7] Among his many other first cousins were the philosopher and statesman Francis Bacon and the spy Anthony Bacon. 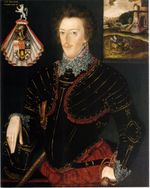 In 1589 Hoby was elected Member of Parliament for Appleby. He was re-elected MP for Appleby in 1593.[8] In 1595, Hoby married Margaret Sidney (1571–1633), daughter and heiress of Arthur Dakins, a landed gentleman of Linton, already the widow of two men, of Walter Devereux, a younger brother of the Earl of Essex, and of Thomas Sidney, a brother of the poet Philip Sidney. Hoby had been an unsuccessful suitor four years earlier, after Margaret had lost her first husband. They set up home at Hackness, Yorkshire, but had no children. Margaret Hoby is notable as a diarist.[9][10][11][12]

A Puritan, in 1600 Hoby brought a legal action against William Eure (1579–1646) and several of his other neighbours, alleging that they had entered his house, taken drink, played cards, ridiculed Puritanism, and threatened to ravish his wife. In 1609 he alleged in the Star Chamber that Sir Richard Cholmley had twice spoken contemptuously to him in the hope of provoking a duel. One historian of the period has described Hoby as "that most overbearing, touchy, and resentful of Yorkshire magistrates".[13] It has been suggested that the character of Malvolio in William Shakespeare's Twelfth Night is based on Hoby[1][14] and that his legal action of 1600 inspired Scene III of Act 2 of Twelfth Night, in which Malvolio is disturbed by drunken merry-making.[15]

As a magistrate, Hoby has been described as "exceptionally conscientious".[16]

On his mother's death in 1609 Hoby inherited from her "all my pastures of the manor of Gyfford in Gloucestershire",[17] and in 1617 he inherited the estates of his brother, Sir Edward.[4]

Hoby died on 30 December 1640 and was entombed with the remains of his wife in the Hackness parish church. By a Will dated 28 March 1640 he left his manor of Hackness to John Sydenham of Brympton in Somerset, the son of his first cousin Alice Hoby, daughter of Sir William Hoby of Hayles, who was Hoby's uncle. He made further bequests to other members of the Sydenham family, and he also left each of his servants three years' wages.[18][19] A memorial to him was erected in the church at Hackness in 1682 by Sir John Posthumous Sydenham (1643–1696), the son of Hoby's principal heir and a knight of the shire for Somerset.[20] There is also a more impressive memorial to him in All Saints' Church, Bisham, where a painted statue of Hoby is among a family group in the Hoby chapel.[21][22]