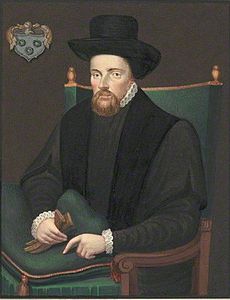 Richardson was born at Hardwick, Depwade Hundred, Norfolk, the son of William Richardson and his wife Agnes, and was baptised there on 3 July 1569. He was educated at Norwich School.[1] On 5 March 1587 he was admitted a student at Lincoln's Inn, where he was called to the bar on 28 January 1595. In 1605 he was deputy steward to the dean and chapter of Norwich. He was subsequently recorder of Bury St. Edmunds and then Norwich. In 1614, he was Lent Reader at Lincoln's Inn, and on 13 October of the same year became serjeant-at-law. At about the same time he was made chancellor to the queen.

Speaker of the House of Commons

In 1621, Richardson was elected Member of Parliament for St Albans.[2] When parliament met on 30 January 1621, he was chosen Speaker of the House of Commons. The excuses which he made before accepting this office appear to have been more than formal, for an eye-witness reports that he 'wept downright.' On 25 March 1621 he was knighted at Whitehall when he brought King James congratulations of the commons upon the recent censure of Sir Giles Mompesson. In the chair he proved a veritable King Log and his term of office was marked by the degradation of Bacon. He was not re-elected to parliament in the next election.

On 20 February 1625 Richardson was made king's serjeant. On 28 November 1626 he succeeded Sir Henry Hobart as Chief Justice of the Common Pleas, after a vacancy of nearly a year. His advancement was said to have cost him £17,000 and his second marriage (see infra). He judged on 13 November 1628, that it was illegal to use the rack to elicit confession from Felton, the murderer of Duke of Buckingham's. His opinion had the concurrence of his colleagues and marks a significant point in the history of English criminal jurisprudence. In the following December he presided at the trial of three of the Jesuits arrested in Clerkenwell, and secured the acquittal of two of them by requiring proof, which was not forthcoming, of their orders.

In the same year he took part in the careful review of the law of constructive treason This arose from the case of Hugh Pine who was charged with that crime for speaking words that were derogatory to the king's majesty. The result of Richardsons's review was to limit the offence to cases of imagining the king's death. He concurred in the guarded and somewhat evasive opinion on the extent of privilege of parliament which the king elicited from the judges after the turbulent scenes which preceded the dissolution of parliament on 4 March 1629. He was as lenient as he could be when he imposed a fine of £500 without imprisonment in the case of Richard Chambers, and his agreement with harsh sentences passed upon Alexander Leighton and William Prynne may have been dictated by timidity, and there contrast strongly with the tenderness which he showed Henry Sherfield, the iconoclastic bencher of Lincoln's Inn.

Chief Justice of the King’s Bench

Richardson was advanced to the chief-justiceship of the king's bench on 24 October 1631, and served on the western circuit. He was not a puritan but in Lent 1632 he made and order, at the instance of the Somerset magistrates, for suppressing the 'wakes' or Sunday revels, which were a fertile source of crime in the county. He directed the order to be read in church and this brought him into conflict with Laud, who sent for him and told him it was the king's pleasure he should rescind the order. Richardson ignored this instruction until the king himself repeated it. He then, at the ensuing summer Assizes (1633), laid the matter fairly before the justices and grand jury, professing his inability to comply with the royal mandate on the ground that the order had been made by the joint consent of the whole bench, and was in fact a mere confirmation and enlargement of similar orders made in the county since the time of Queen Elizabeth, all which he substantiated from the county records. This caused him to be cited before the council, reprimanded, and transferred to the Essex circuit. 'I am like,' he muttered as he left the council board, 'to be choked with the archbishop's lawn sleeves.'

Richardson died at his house in Chancery Lane on 4 February 1635 and was buried in the north aisle of the choir of Westminster Abbey, beneath a marble monument. There is a bust by Hubert Le Sueur.

Richardson was a capable lawyer and a weak man, much addicted to flouts and jeers. 'Let him have the Book of Martyrs' he said, when the question whether Prynne should be allowed the use of books was before the court; 'for the puritans do account him a martyr.' He could also make a caustic jest at his own expense. 'You see now’ he dryly remarked, as he avoided a missile aimed at him by a condemned felon by stooping low, 'if I had been an upright judge I had been slain.' He possessed some polite learning, which caused John Taylor, the water poet, to dedicate to him one of the impressions of his Superbiae Flagellum (1621).

Richardson married twice. His first wife, Ursula Southwell was the third daughter of John Southwell of Barham Hall, Suffolk. She was buried at St. Andrew's, Holborn, on 13 June 1624. His second wife, married at St Giles in the Fields, Middlesex, on 14 December 1626, was Elizabeth widow of Sir John Ashburnham and daughter of Sir Thomas Beaumont of Stoughton, Leicestershire. She was the first Duke of Buckingham's maternal second cousin once removed.

Richardson had twelve children by his first wife, of whom four daughters and one son, Thomas, survived him. By his second wife he had no issue. She was created on 28 February 1629 Lady Cramond in the peerage of Scotland, for life, with remainder to her stepson, Sir Thomas Richardson, K.B. Sir Thomas died in her lifetime on 12 March 1645 and his son Thomas succeeded to the peerage on her death in April 1651. The title became extinct by the death, without issue, of William, the fifth lord, in 1735.