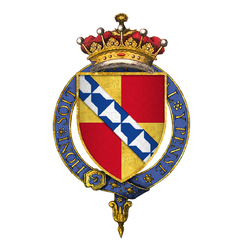 Thomas Sackville, 1st Earl of Dorset (1536 – 19 April 1608) was an English statesman, poet, and dramatist. He was the son of Richard Sackville, a cousin to Anne Boleyn. He was a Member of Parliament and Lord High Treasurer.

He first entered Parliament as MP for Westmorland in 1558, followed by election as MP for East Grinstead in 1559 and Aylesbury in 1563.[1]

Thomas Sackville was the author, with Thomas Norton, of the first English drama to be written in blank verse, Gorboduc (1561), which deals with the consequences of political rivalry. He also contributed to the 1563 edition of The Mirror for Magistrates, with the poem Complaint of Henry, Duke of Buckingham. Sackville's first important work was the poem Induction which describes the poet's journey to the infernal regions, where he encounters figures representing forms of suffering and terror. The poem is noted for the power of its allegory and for its sombre stateliness of tone.

He travelled to Rome, Italy, in 1566, and was detained there as a prisoner for fourteen days, for reasons not clear. The first important employment which Lord Buckhurst had was in 1571, when he was sent on a special mission to king Charles IX of France to congratulate him on his marriage with Elizabeth of Austria, the daughter of the Emperor Maximilian, and also to negotiate the matter of the proposed alliance of Queen Elizabeth and the Duke of Anjou, brother of the French king.

In 1572, he was one of the peers that sat on the trial of Thomas Howard, 4th Duke of Norfolk. In 1586 he was selected to convey to Mary, Queen of Scots, the sentence of death confirmed by the English Parliament. In 1587 he went as ambassador to the United Provinces, upon their complaint against the Earl of Leicester; but, though he performed his trust with integrity, the favourite had sufficient influence to get him recalled; and on his return, he was ordered to confinement in his own house, for nine or ten months.[2] He incurred her displeasure by what she called his "shallow judgement in diplomacy".

In 1591, Sackville became Chancellor of the University of Oxford. He succeeded William Cecil, Lord Burghley as Lord Treasurer for life in 1599, and was a capable, if uninspired, financial manager. In 1604, Sackville bought Groombridge Place in Kent. His other houses included, Knole House, in Sevenoaks, Kent (now owned by the NT), Michelham Priory, in East Sussex and Dorset House,[3] near Fleet Street, London (burnt down in the Great Fire of London). 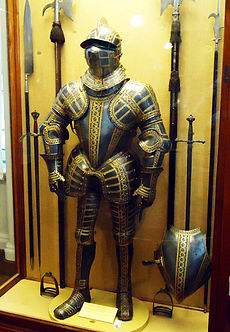 The armour of Thomas Sackville, made in the Greenwich Royal Workshops.

Sackville was created Baron Buckhurst, of Buckhurst in the County of Sussex, in 1567. Sackville acquired a large fortune through his real estate dealings in many counties, as well as his investments in the iron foundry business. He was an advocate of stronger enforcement of the Sumptuary Laws, which regulated the types of clothing allowed to be worn by the various social classes, within the military. Specifically, he dictated that only soldiers holding the rank of Colonel or above should be permitted to wear silk and velvet, and that Captains and all ranks below should "make do with fustian and spend the remaining money on their arms.".[4]

In around 1587, Sackville was granted a royal licence to commission an armour from the Royal Workshops at Greenwich. The finely etched, blued and gilt armour, a garniture for the field, is one of the finest and best-preserved examples of the Greenwich school of armour-making known to exist. It is now part of the Wallace Collection in London.[5] Another, similar armour, featuring the same construction and decorative scheme, which belonged to Sir James Scudamore, can be seen at the Metropolitan Museum of Art in New York.

Queen Elizabeth I acquired Bexhill Manor in 1590 and granted it to Sackville. He was also the last Sackville to be Lord of the Manor of Bergholt Sackville (named after the Sackville family) and Mount Bures in Essex when he sold them in 1578 to Mrs Alice Dister. Both estates had been in the family for 459 years.[6] He was created Earl of Dorset in 1604.

He died suddenly at the council table, having apparently suffered a stroke, referred to as "a dropsy on the brain". His funeral took place at Westminster Abbey and he is buried in The Sackville family vault at Withyham parish Church, East Sussex

Sackville married Cicely Baker in 1555[7] and had seven children, including his heir Robert, and Sir William Sackville, knighted by Henry IV of France.[8]