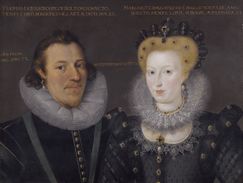 He held the office of Warden of the English West March from 1593 until the Union of the Crowns of England and Scotland in 1603. He was made a Knight of the Garter in 1599.

While Scrope was Warden, the outlaw Kinmont Willie Armstrong was arrested (in violation of a truce day) and imprisoned at Carlisle Castle. Scrope had only recently been appointed to the post of Warden, and he was unsure of what to do with an outlaw who had been illegally arrested. On 13 April 1596, as a result of a raid orchestrated by Walter Scott, 1st Lord Scott of Buccleuch, Kinmont Willie was freed. In a failed attempt to recapture Kinmont Willie, Scrope "burnt the towns of Annan and Dumfries to the ground, capturing two hundred prisoners whom he marched home 'naked, chained together on leashes'. This caused a major diplomatic incident." [2]

He died at the village of Langar in Nottinghamshire, England in 1609. In 1584, he had married Philadelphia Carey, daughter of Henry Carey, 1st Baron Hunsdon and Ann Morgan. They had one child Emanuel Scrope, 1st Earl of Sunderland. In the village church at Langar is to be found a magnificent memorial to him. His tomb is adorned with an effigy of himself, his wife and their son Emmanuel.