Thomas Sherlock (1678 – 18 July 1761) was a British divine who served as a Church of England bishop for 33 years. He is also noted in church history as an important contributor to Christian apologetics.

Born in London, he was the son of the Very Revd William Sherlock, Dean of St Paul's. He was educated at Eton College and St Catharine's College, Cambridge.[1] In 1704 he succeeded his father as Master of the Temple, where he was very popular.

Sherlock died in 1761 and is buried in the churchyard of All Saints Church, Fulham, Middlesex.

In 1714 he became master of his old college at Cambridge and later the university's vice-chancellor, whose privileges he defended against Richard Bentley. In 1715, he was appointed Dean of Chichester.

He took a prominent part in the Bangorian controversy against Benjamin Hoadly. Sherlock became Bishop of Bangor in 1728; he was afterwards translated to Salisbury in 1734 and then to London in 1748, when he was sworn of the Privy Council. Sherlock was a capable administrator and cultivated friendly relations with Dissenters. In Parliament he gave good service to his old schoolfellow, Robert Walpole, Prime Minister of the United Kingdom. 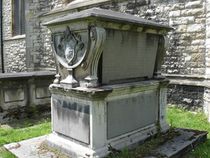 He published against Anthony Collins's deistic Grounds of the Christian Religion a volume of sermons entitled The Use and Intent of Prophecy in the Several Ages of the World (1725); and in reply to Thomas Woolston's Discourses on the Miracles he wrote a volume entitled The Tryal of the Witnesses of the Resurrection of Jesus (1729), which soon ran through fourteen editions. His Pastoral Letter (1750) on the late earthquakes had a circulation of many thousands, and four or five volumes of Sermons which he published in his later years (1754–1758) were also at one time highly esteemed.

A collected edition of his works, with a memoir, in five volumes, by Thomas Smart Hughes, appeared in 1830.

Sherlock's Tryal of the Witnesses is generally understood by scholars such as Edward Carpenter, Colin Brown and William Lane Craig, to be a work that the Scottish philosopher David Hume probably had read and to which Hume offered a counter viewpoint in his empiricist arguments against the possibility of miracles.

Since the Deist controversy Sherlock's argument for the evidences of the resurrection of Jesus Christ has continued to interest later Christian apologists such as William Lane Craig and John Warwick Montgomery. His place in the history of apologetics has been classified by Ross Clifford as belonging to the legal or juridical school of Christian apologetics.