Thomas Earl Starzl (March 11, 1926 - March 4, 2017) was an American physician, researcher, and expert on organ transplants. He performed the first human liver transplants, and has often been referred to as "the father of modern transplantation."[1]

Starzl was born on March 11, 1926, in Le Mars, Iowa, the son of newspaper editor and science fiction writer Roman Frederick Starzl and Anna Laura Fitzgerald who was a teacher and a nurse. He is the second of four siblings.[2] Originally intending to become a priest in his teenage years, Starzl's plans changed drastically when his mother died from breast cancer in 1947.[2]

He attended Westminster College in Fulton, Missouri, where he earned a Bachelor of Science degree in biology. Starzl attended Northwestern University Medical School in Chicago, where in 1950 he received a Master of Science degree in anatomy and in 1952 earned both a Ph.D. in neurophysiology and an M.D. with distinction.[3] While attending medical school, he established a long friendship with Professor Loyal Davis, MD a neurosurgeon.[2]

Starzl spent an extra year at medical school, using the additional time to complete a doctorate in neurophysiology, in 1952. He wrote a seminal paper describing a technique to record the electrical responses of deep brain structures to sensory stimuli such as a flash of light or a loud sound. The paper is still cited today.

After obtaining his medical degree, Starzl trained in surgery at Johns Hopkins Hospital in Baltimore and Jackson Memorial Hospital in Miami. At both places, he conducted lab and animal research, showing a keen interest in liver biology.

Starzl was a surgeon and researcher in the then nascent field of organ transplantation at the University of Colorado from 1962 until his move to the University of Pittsburgh in 1981, where he has remained since. He made an exceptional mark on the medical community creating new surgical techniques. He reportedly worked up to three days straight on organ transplantation procedures as he was the only one who could perform them.

The Institute for Scientific Information released information in 1999 that documented that his work had been cited more than any other researcher in the world. Between 1981 and June 1998, he was cited 26,456 times.[2]

His autobiographical memoir, The Puzzle People, was named by The Wall Street Journal as the third best book on doctors' lives.[4]

Starzl's most notable accomplishments include: 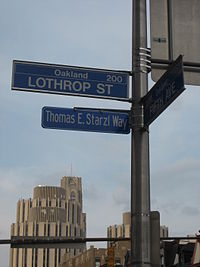 Thomas E. Starzl Way on the campus of the University of Pittsburgh 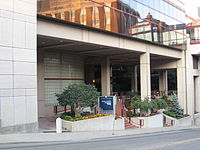 Entrance to the Thomas Starzl Biomedical Research Tower at the University of Pittsburgh.

Starzl was named one of the most important people of the Millennium, ranking No. 213, according to the authors of "1,000 Years, 1,000 People: Ranking the Men and Women Who Shaped the Millennium " (Kodansha America, 332 pp.)[1]

Starzl has also received honorary degrees from 26 universities in the United States and abroad, which include 12 in Science, 11 in Medicine, 2 in Humane Letters, and 1 in Law.

In 2006, at a celebration for his 80th birthday, the University of Pittsburgh renamed one of its newest medical research buildings the Thomas E. Starzl Biomedical Science Tower in recognition of his achievements and contributions to the field.[15] On October 15, 2007, the Western Pennsylvania American Liver Foundation and the City of Pittsburgh honored Starzl by dedicating Lothrop Street, near his office and the biomedical research tower bearing his name, as "Thomas E. Starzl Way".[16]

Retired from clinical and surgical service since 1991, Dr. Starzl now devotes his time to research endeavors and remains active as professor of surgery at the University of Pittsburgh School of Medicine and the University of Pittsburgh Medical Center’s (UPMC) program named in his honor: the Thomas E. Starzl Transplantation Institute. Since his “retirement,” he has earned the additional distinctions of being one of the most prolific scientists in the world as well as the most cited scientist in the field of clinical medicine.[17]

On the television medical drama Three Rivers, the resume of the fictional transplant pioneer is based on Starzl's accomplishments.[18]