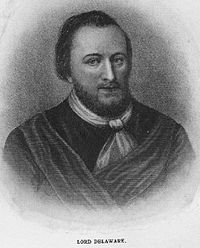 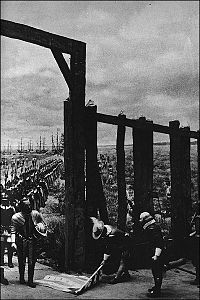 Depiction of the arrival of De La Warr at Jamestown

Thomas West, 3rd and 12th Baron De La Warr (9 July 1577 – 7 June 1618) was an English-American politician, for whom the bay, the river, and, consequently, a Native American people and U.S. state, all later called "Delaware", were named. "De La Warr" is pronounced "Delaware".[1][2][3] (For etymology of the surname itself, see Earl De La Warr§Etymology.)

There have been two creations of Baron De La Warr, and West came from the second. He was the son of Thomas West, 2nd Baron De La Warr, of Wherwell Abbey in Hampshire. He was born at Wherwell, Hampshire, England, and died at sea while travelling from England to the Colony of Virginia.

West received his education at Queen's College, Oxford. He served in the army under Robert Devereux, 2nd Earl of Essex, and, in 1601, was charged with supporting Essex's ill-fated insurrection against Queen Elizabeth, but he was acquitted of those charges.[4] He succeeded his father as Baron De La Warr, in 1602, and became a member of the Privy Council.[5]

After the Powhatans had tea with the colony's Council President, John Ratcliffe, and attacked the colony in the First Anglo-Powhatan War, Lord De La Warr headed the contingent of 150 men who landed in Jamestown, Virginia on June 10, 1610, just in time to persuade the original settlers not to give up and go home to England. As a veteran of destructive English campaigns against the Irish, De La Warr employed those "scorched earth" tactics against the Native Americans: troops raided villages, burned houses, torched cornfields, and stole provisions; these tactics, identical to those practiced by the Powhatan themselves, proved effective. He had been appointed governor-for-life (and captain-general) of Virginia, and he outfitted their three ships and recruited and equipped those men at his own expense. Leaving his deputy Sir Samuel Argall (c. 1580 – c. 1626) in charge, Lord De La Warr returned to England and published a book about Virginia, The Relation of the Right Honourable the Lord De-La-Warre, of the Colonie, Planted in Virginia, in 1611. He remained the nominal governor, and he had received complaints from the Virginia settlers about Argall's tyranny in governing them for him, so Lord De La Warr set sail for Virginia again in 1618, to investigate those charges. He died at sea, en route to Virginia, and it was thought for many years that he had been buried in the Azores or at sea.[4]

In 2006, recent research had concluded that his body was brought to Jamestown for burial. A grave site thought by researchers to contain the remains of Captain Bartholomew Gosnold may instead contain those of Baron De La Warr.[6]