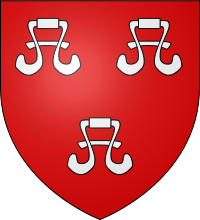 Thomas de Ros was a younger brother of John de Ros, 7th Baron de Ros, who died childless at the Battle of Beaugé on 22 March 1421. Thomas inherited his rank and privileges, and followed the example of his brother in participating in the Hundred Years' War. He fought in the Battle of Verneuil under the command of John, Duke of Bedford. He was honored for his efforts, knighted by Henry VI of England on 19 May 1426. Henry was nephew of the Duke. Thomas resumed service under the Duke in 1427. He was summoned to the Parliament of England in 1429. In 1430 he fell into the Seine during a minor skirmish and was drowned.

Thomas de Ros married Eleanor Beauchamp, daughter of Richard de Beauchamp, 13th Earl of Warwick, and his first wife, Elizabeth Berkeley, by whom he had two sons and a daughter:[3]