Thomas distinguished himself in France, against Jack Cade and in many other places. He was rewarded with a grant of £100 a year during his life and the privilege of a 200 tonne ship to transport goods wherever he saw fit (excluding Calais). He was summoned to Parliament from 1445 to 1460.

Scales was an important man of considerable wealth. This is alluded to in Shakespeare's Henry VI, Part 3: King Edward IV's brothers George and Richard complain to Edward about his bestowal of Scales' heiress (one of the wealthiest in England) on his Queen's parvenu brother, instead of one of them. 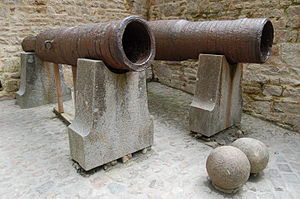 In 1422, Scales crossed the Channel to Normandy, and served as a lieutenant of John of Lancaster, the Duke of Bedford.

By 1423, Scales was captain of Verneuil. From 1424 to 1425, he fought alongside John Fastolf to recapture the fortress at Maine. He was captured at the Battle of Patay in 1429 and later ransomed.

According to a recruitment roll now at the National Army Museum, he commanded a corps of 728 archers (some with fire-tipped arrows) and about 50 infantry at the siege of Saint-Denis. In 1439, to cut off Mont-Saint-Michel, at the end of the French bridge in English-held territory, he founded the citadel of Granville. In 1442 Granville was taken by surprise by the French defenders of the Mont.

In the Wars of the Roses Scales fought for Lancaster, and as such appears in Shakespeare's Henry VI, Part 2. On 25 July 1460 Scales was murdered,[2] having, as commander of the Tower of London, turned its weapons against the city which was supporting the Yorkist Earl of Salisbury in besieging the Tower.[3]

Argent, a fess and a canton gules[2]