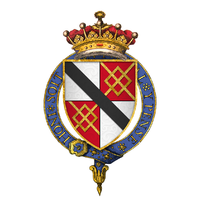 A supporter of Richard II against Thomas of Woodstock and the Lords Appellant, he was rewarded with an Earldom as Earl of Gloucester in 1397.

However, he supported Henry Bolingbroke on his return to England to become King Henry IV, only to be attainted (deprived of his Earldom because of a capital crime) for his role in the death of Thomas of Woodstock.

He then took part in the Epiphany Rising, a rebellion led by a number of Barons aimed at restoring Richard to the throne by assassinating King Henry IV; this quickly failed when the conspirators were betrayed by Edward of Norwich, 2nd Duke of York to Henry. After fleeing to the western counties, a number of the Epiphany Rising conspirators were captured and killed by mobs of townspeople loyal to the king; Despenser was captured by a mob and beheaded at Bristol on 13 January 1400.

Thomas le Despenser married Constance, daughter of Edmund of Langley, 1st Duke of York. They had issue, of whom: