Thomas of Brotherton, born 1 June 1300, was the fifth son of Edward I, and the eldest son of his second marriage to Margaret (1279?–1318), the daughter of Philippe III of France (d.1285).[1] He was born at the manor house[2] at Brotherton, Yorkshire, while his mother was on her way to Cawood, where her confinement was scheduled to take place. According to Hilton, Margaret was staying at Pontefract Castle and was following a hunt when she went into labour.[3] The chronicler William Rishanger records that during the difficult delivery his mother prayed, as was the custom at the time, to Thomas Becket, and Thomas of Brotherton was thus named after the saint and his place of birth.[1]

Edward I quickly rushed to the queen and the newborn baby and had him presented with two cradles. His brother Edmund was born in the year after that. They were overseen by wet nurses until they were six years old. Like their parents, they learned to play chess and to ride horses. They were visited by nobles and their half-sister Mary of Woodstock, who was a nun. Their mother often accompanied Edward on his campaigns to Scotland, but kept herself well-informed on their well-being.[3]

His father died when he was 7 years old. Thomas's half-brother, Edward, became king of England and Thomas was heir presumptive until his nephew Edward was born in 1312. The Earldom of Cornwall had been intended for Thomas, but Edward instead bestowed it upon his favourite, Piers Gaveston, in 1306. When Thomas was 10 years old, Edward assigned to him and his brother Edmund, the estates of Roger Bigod, 5th Earl of Norfolk who had died without heirs in 1306. 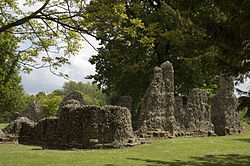 In 1312, he was titled "Earl of Norfolk" and on 10 February 1316 he was created Earl Marshal. While his brother was away fighting in Scotland, he was left Keeper of England. He was known for his hot and violent temper. He was one of the many victims of the unchecked greed of the king's new favourite, Hugh Despenser the Younger and his father Hugh Despenser the Elder, who stole some of the young earl's lands. He allied himself with Queen Isabella and Roger Mortimer when they invaded England in 1326, and stood as one of the judges in the trials against both Despensers. When his nephew Edward III reached his majority and took the government into his own hands Thomas became one of his principal advisors. It was in the capacity of Lord Marshal that he commanded the right wing of the English army at the Battle of Halidon Hill on 19 July 1333.

He was succeeded by his daughter, Margaret, as Countess of Norfolk.[1] She was later created Duchess of Norfolk for life in 1397.[5]

As a son of Edward I of England, he was entitled to bear the coat of arms of the Kingdom of England, differenced by a label argent of three points.[6]

Alice Hales died by October 1330, when a chantry was founded for her soul in Bosham, Sussex.[10]