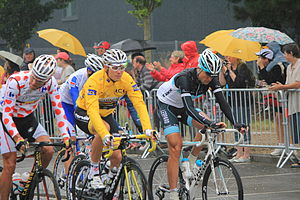 Hushovd (in yellow) at the 2011 Tour de France. Hushovd held the overall lead of the race from the second to the ninth stage of the race. 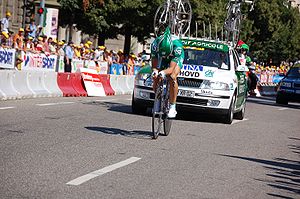 Hushovd at the 2006 Tour de France; his win in the prologue was one of two stage wins during the race.

Thor Hushovd (born 18 January 1978) is a former Norwegian professional road bicycle racer riding for BMC Racing Team.[2] He is known for sprinting and time trialing; Hushovd is a three-time Norwegian national road race champion (2004, 2010, 2013),[3] and was the winner of the 2010 World Road Race Championships. He was the first Norwegian to lead the Tour de France, and first Scandinavian to win the road race in cycling world road championship. He is also the Scandinavian with the most stage wins in Grand Tours. He is widely considered the greatest Norwegian cyclist of all time. He retired in September 2014.[4]

Born in Grimstad, Aust-Agder, Norway, Hushovd won the under-23 time trial world championship and the under-23 versions of Paris–Roubaix and Paris–Tours before turning professional in 1998. He was Norwegian time trial champion in 2004 and 2005 and road race champion in 2004 and 2010. In 2006, he won seven UCI ProTour races and two stages of the Tour de France. He won the prologue in Strasbourg and led after the first day despite a cut arm. He continued with stitches and regained the yellow jersey after stage 2 with a third place. He won the last stage, beating Robbie McEwen in a sprint. In the 2006 Vuelta a España he won stage 6, wore the golden jersey for three stages and won the points classification

In 2009, Hushovd rode for the Cervélo TestTeam.[6] He took one of the team's first victories of the season by winning Stage 3 of the Tour of California. At the Tour de France, he won green jersey for the points classification for the second time, ahead of Mark Cavendish. Typically the sprinter with the most stage victories wins the points classification, though Hushovd only won one stage, stage 6, while Cavendish won six. After a controversy on stage 14, where Cavendish was relegated to the back of the peloton for impeding Hushovd, Hushovd attacked alone on stage 17, a mountain stage, winning two intermediate sprints.[7][8] Hushovd won stage 3 at the Tour of Missouri – 114 mi (183 km) over rolling hills – in September 2009, in a sprint finish.

On 9 May 2010, Hushovd broke his collarbone on a training ride after colliding with a young girl.[9] At the Tour de France, Hushovd won the third stage, which was an unusual one for the Tour since it featured 13 km (8.1 mi) of cobblestones. He prevailed in the sprint involving five other riders.[10] That victory netted him the Green jersey, but he ultimately lost it to Alessandro Petacchi of the Lampre–Farnese Vini team.

On 3 October 2010, Hushovd won the road world championship, which started in Melbourne and finished in Geelong, Australia. He was the first Norwegian to win the rainbow jersey.[11][12] VeloNews said: "Hushovd...dominated a bunch sprint at the end of a thrilling 267km race, beating Denmark’s Matti Breschel and Australia’s Allan Davis." The favorite, Philippe Gilbert, was caught with three kilometers to go.[13]

During the 2011 Tour de France Hushovd claimed the Maillot Jaune and surprised many by keeping it through several hilly stages that were not expected to suit him and second placed Cadel Evans could not over turn the 1 second advantage that Hushovd held. Hushovd surprised his fans again on stage 13 by being one of the first riders over the Hors Categorie Col d'Aubisque and using his superior descending skills (he was clocked at 69 mph at one point) to catch and pass the leaders David Moncoutie and Jérémy Roy to take the stage. He used his descending skills again on stage 16 when he, Edvald Boasson Hagen and teammate Ryder Hesjedal went clear on the descent of the Col de Manse (a descent that overall runner up Andy Schleck deemed too dangerous for the tour) and beat Boasson Hagen in the final sprint to take his second stage of the tour.

In 2012, Hushovd joined BMC Racing Team on a three-year contract.[14] Suffering from a then unknown medical condition, he had to abandon the Giro d'Italia and cancelled his scheduled participation to the Tour de France and Olympic road race.[15] The medical impairment was later identified as a "virus and muscle inflammation" by team doctors.[16] Hushovd hardly achieved any notable result in the season except fourteenth at Paris-Roubaix. In October, he said that he hoped to put the bad year and the virus that ruined it behind him and that he was optimistic and motivated about the 2013 season.[17]

Hushovd earned his first win since the 2011 Tour of Britain with a sprint victory over Tom-Jelte Slagter of Blanco Pro Cycling on stage 1 of the Tour du Haut Var in February. It was also his first victory with BMC Racing Team.[18]

In June 2014 Hushovd announced that he would retire after the 2014 UCI Road World Championships after struggling with Infectious mononucleosis since 2012.[19][20] However, after a hard crash suffered at the Tour du Poitou-Charentes, Hushovd said he would not participate in the World Championships.[21] His last race was the GP Impanis-Van Petegem in September.[4]

2015 Hushovd announced that he had started working on organising an all-Norwegian UCI WorldTeam, with a plan to launch in the 2017 season to coincide with the hosting of the 2017 UCI Road World Championships in the Norwegian city of Bergen.[22]

Hushovd currently resides in Monte Carlo,[23][24] with his wife Susanne,[25] and their daughter Isabel (b. 2009).[26] The Hushovds also maintain an offseason residency in Grimstad, Aust-Agder, Norway.[27]