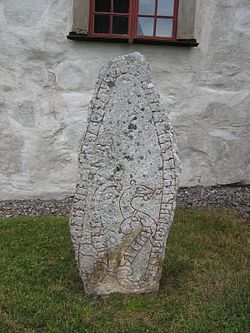 The rune stone U 344 in Orkesta, Uppland, Sweden, was raised by the Viking Ulfr who commemorated that he had taken a danegeld in England with Thorkell the Tall. He took two others with Skagul Toste and Cnut the Great. 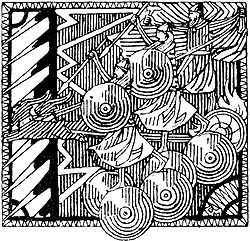 Storm in Hjørungavåg by Gerhard Munthe

Thorkell the Tall, also known as Thorkell the High in the Anglo-Saxon Chronicle (Old Norse: Þorke(ti)ll inn hávi; Norwegian: Torkjell Høge; Swedish; Torkel Höge: Danish: Torkild den Høje) was a prominent members of the Jomsviking order and a notable lord. He was a son of the Scanian chieftain Strut-Harald, a brother of Jarl Sigvaldi, commander of the Jomvikings and the legendary stronghold, Jomsborg, on the Island of Wollin.

While it is certain that Thorkell is undoubtedly a real historical figure, his career, especially its early part, is steeped in associations with the legendary Jomsvikings. Thorkell took part in the Battle of Hjörungavágr in 986 and in the Battle of Swold in 1000. He attacked England in 1010, landing near Ipswich on the shores of the River Orwell at Nacton with a large army, defeating the local army sent from Ipswich. He was eventually paid an unusually large Danegeld in 1011.

In 1012, Thorkell's men took Archbishop Ælfheah of Canterbury hostage, who had previously been instrumental in negotiating danegeld payments. It is said that Alphege refused to be exchanged for ransom organised by Eadric Streona as he did not wish to further impoverish his countrymen. As a consequence of this he was murdered by Thorkell's men during a drunken feast. Sensing that he was losing control over his men, Thorkell and his loyalists defected. He and his men entered into the service of king Ethelred the Unready, whom they fought under in 1013 against the invasion of king Sweyn Forkbeard and his son Cnut. [1]

After the death of Sweyn, and the English attacks on the Danish invaders which drove his son to abandon the conquest, Ethelred's forces were turned against the Jomsvikings in his service. Thorkell's brother Heming was killed,[2] and he went back to Denmark, with a score to settle in England. He was to return with the future king in 1015, and the invasion's success meant he was proclaimed to be the Jarl of East Anglia, in 1017, after the coronation of Cnut as King of England. An explanation for Cnut's acceptance of Thorkell's allegiance, not to mention his military prowess, may be that he was in fact his childhood mentor,[3] and the Jomsvikings were also of special worth to Cnut. He himself held a score against the men responsible for the betrayal of oaths of allegiance given by the English nobles after his father's conquest. If it was Thorkell's men who taught Cnut to fight his battles, such bonds as these were surely hard broken, even with opposition in war.

In 1021, Jarl Thorkell fell out with king Cnut, and having to make himself scarce went to Denmark. [4] This appears to have been as a result of a trial of his wife, who was found guilty of poisoning his son by his first marriage, with the help of a witch. Thorkell had sworn to her innocence and consequently lost face. He was soon reconciled with Cnut again, who proclaimed him Jarl of Denmark once more, although he seems to disappear in 1023, as there is no mention of him after this point.[5] It may be he was simply too old for any more conflict, and the final years of his life spent at court, yet with no military commands. It may also be that he was cast out of the kingdom, to return to Jomsborg or Scania, and lived the rest of his days as a wayward old soldier. Equally, he might have been dead soon after he was made Jarl of Denmark with causes either natural or malevolent.