Upper- and lower-case versions of the thorn character

Thorn or þorn (Þ, þ) is a letter in the Old English, Gothic, Old Norse and modern Icelandic alphabets, as well as some dialects of Middle English. It was also used in medieval Scandinavia, but was later replaced with the digraph th, except in Iceland, where it survives. The letter originated from the rune ᚦ in the Elder Fuþark and was called thorn in the Anglo-Saxon and thorn or thurs (a category of beings in Germanic paganism) in the Scandinavian rune poems. Its reconstructed Proto-Germanic name is Thurisaz.

It is pronounced as either a voiceless dental fricative [θ] or the voiced counterpart of it [ð]. However, in modern Icelandic, it is pronounced as a laminal voiceless alveolar non-sibilant fricative [θ̠],[1][2] similar to th as in the English word thick, or a (usually apical) voiced alveolar non-sibilant fricative [ð̠],[1][2] similar to th as in the English word the. Modern Icelandic usage generally excludes the latter, which is instead represented with the letter eth ⟨Ð, ð⟩; however, [ð̠] may occur as an allophone of /θ̠/, and written ⟨þ⟩, when it appears in an unstressed pronoun or adverb after a voiced sound.[3]

In typography, the lower-case thorn character is unusual in that it has both an ascender and a descender.

The letter thorn was used for writing Old English very early on, as was ð; unlike ð, however, thorn remained in common use through most of the Middle English period. Both letters were used for the phoneme /θ/, sometimes by the same scribe. This sound was regularly realized in Old English as the voiced fricative [ð] between voiced sounds, but either letter could be used to write it; the modern use of [ð] in phonetic alphabets is not the same as the Old English orthographic use. A thorn with the ascender crossed (Ꝥ) was a popular abbreviation for the word that.

The modern digraph th began to grow in popularity during the 14th century; at the same time, the shape of thorn grew less distinctive, with the letter losing its ascender (becoming similar in appearance to the old wynn (Ƿ, ƿ), which had fallen out of use by 1300, and to ancient through modern P, p). In some hands, such as that of the scribe of the unique mid-15th-century manuscript of The Boke of Margery Kempe, it ultimately became indistinguishable from the letter Y. By this stage, th was predominant and the use of thorn was largely restricted to certain common words and abbreviations. In William Caxton's pioneering printed English, it is rare except in an abbreviated the, written with a thorn and a superscript E. This was the longest-lived use, though the substitution of Y for thorn soon became ubiquitous, leading to the common 'ye', as in 'Ye Olde Curiositie Shoppe'. One major reason for this was that Y existed in the printer's type fonts that were imported from Germany or Italy, while thorn did not. The word was never pronounced with a "y" sound, though, even when so written. The first printing of the King James Version of the Bible in 1611 used the Y form of thorn with a superscript E in places such as Job 1:9, John 15:1, and Romans 15:29. It also used a similar form with a superscript T, which was an abbreviated that, in places such as 2 Corinthians 13:7. All were replaced in later printings by the or that, respectively.

The following were abbreviations during Middle and Early Modern English using the letter thorn:

Thorn in the form of a "Y" survives to this day in pseudo-archaic uses, particularly the stock prefix "Ye olde". The definite article spelled with "Y" for thorn is often jocularly or mistakenly pronounced /jiː/ or mistaken for the archaic nominative case of the second person (both singular and plural) pronoun, "ye".

The Icelandic language is the only living language to retain the letter thorn (in Icelandic; þ, pronounced þoddn, [θ̠ɔtn̥] or þordn, [θ̠ɔrtn̥] in common usage). The letter is the 30th in the Icelandic alphabet; it is transliterated to th when it cannot be reproduced[4] and never appears at the end of a word. Its pronunciation has not varied much, but before the introduction of the eth character, þ was used to represent the sound [ð], as in the word "verþa", which is spelled verða (meaning "to become") in modern Icelandic or normalized orthography.[5] Þ was originally taken from the runic alphabet and is described in the First Grammatical Treatise:

For example, the patronymic name of Icelandic athlete Anníe Mist Þórisdóttir is anglicized as Thorisdottir. 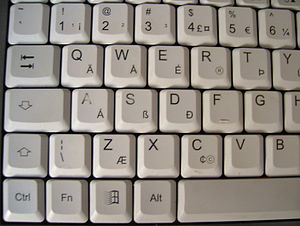 Thorn can be typed on a normal QWERTY keyboard using various system dependent methods. Thorn may also be accessible by copy-and-pasting from a character map, through changing the keyboard layout or through a compose key.

A thorn with a stroke on the ascender (Ꝥꝥ) was used in English (see the section on usage).