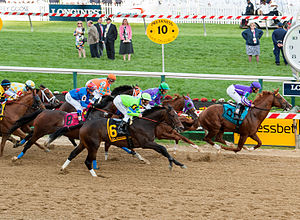 The start of the 2014 Preakness Stakes, an American Thoroughbred horse race.

Thoroughbred horse racing is a worldwide sport and industry involving the racing of Thoroughbred horses. It is governed by different national bodies. There are two forms of the sport: Flat racing and jump racing, called National Hunt racing in the UK and steeplechasing in the US. Jump racing can be further divided into hurdling and steeplechasing.

Ownership and training of racehorses

Traditionally racehorses have been owned by very wealthy individuals. It has become increasingly common in the last few decades for horses to be owned by syndicates or partnerships. Notable examples include the 2005 Epsom Derby winner Motivator, owned by the Royal Ascot Racing Club, 2003 Kentucky Derby winner Funny Cide, owned by a group of 10 partners organized as Sackatoga Stable. 2008 Kentucky Derby winner Big Brown, owned by IEAH stables, a horse racing hedgefund organization.

Historically, most race horses were bred and raced by their owners. Beginning after World War II, the commercial breeding industry became significantly more important in North America, Europe and Australasia, with the result that a substantial portion of Thoroughbreds are now sold by their breeders, either at public auction or through private sales. Additionally, owners may acquire Thoroughbreds by "claiming" them out of a race (see discussion of types of races below).

A horse runs in the unique colours of its owner. These colours must be registered under the national governing bodies and no two owners may have the same colours. The rights to certain colour arrangements ("cherished colours") are valuable in the same way that distinctive car registration numbers are of value. It is said that Sue Magnier (owner of George Washington, Galileo etc.) paid £50,000 for her distinctive dark blue colours.[1] If an owner has more than one horse running in the same race then some slight variant in colours is often used (normally a different coloured cap) or the race club colours may be used.

The horse owner typically pays a monthly retainer or, in North America, a "day rate" to his or her trainer, together with fees for use of the training center or gallops (if the horse is not stabled at a race track), veterinarian and farrier (horseshoer) fees and other expenses such as mortality insurance premiums, stakes entry fees and jockeys' fees. The typical cost of owning a race horse in training for one year is in the order of £15,000 in the United Kingdom and as much as $35,000 at major race tracks in North America.

The facilities available to trainers vary enormously. Some trainers have only a few horses in the yard and pay to use other trainers' gallops. Other trainers have every conceivable training asset. It is a feature of racing that a modest establishment often holds its own against the bigger players even in a top race. This is particularly true of national hunt racing.

In 1976, Canadian Bound became the first Thoroughbred yearling racehorse ever to be sold for more than US$1 million when he was purchased at the Keeneland July sale by Canadians, Ted Burnett & John Sikura, Jr. [1]

Racing is governed on an All-Ireland basis, with two bodies sharing organising responsibility. The Turf Club is the rulemaking and enforcement body, whilst Horse Racing Ireland governs and promotes racing. In 2013, Ireland exported more than 4,800 Thoroughbreds to 37 countries worldwide with a total value in excess of €205 million ($278 million). This is double the amount of horses exported annually from the U.S.[2]

In Great Britain, Thoroughbred horse racing is governed by the British Horseracing Authority (BHA) which makes and enforces the rules, issues licences or permits to trainers and jockeys, and runs the races through their race course officials. The Jockey Club in the UK has been released from its regulatory function but still performs various supporting roles.

A significant part of the BHA's work relates to the disciplining of trainers and jockeys, including appeals from decisions made by the course stewards. Disciplinary enquiries usually relate to the running of a horse, for example: failure to run a horse on its merits, interference with other runners, excessive use of the whip. The emergence of internet betting exchanges has created opportunities for the public to lay horses and this development has been associated with some high profile disciplinary proceedings.

In order to run under rules a horse must be registered at Weatherbys as a Thoroughbred. It must also reside permanently at the yard of a trainer licensed by the BHA or a permit holder. Similarly the horse's owner or owners must be registered as owners.

Regulation and control of racing in the United States is highly fragmented. Generally, a state government entity in each American state that conducts racing will license owners, trainers and others involved in the industry, set racing dates, and enforce drug restrictions and other rules.[3] Pedigree matters and the registration of racing colours, however, are the province of The Jockey Club, which maintains the American Stud Book and approves the names of all Thoroughbreds.

Regulation of horse racing in Canada is under the Jockey Club of Canada. There are a few racing venues across Canada, but the major events are mainly in Ontario and managed by the Woodbine Entertainment Group, formerly Ontario Jockey Club. While British Columbia's major venue is Hastings Racecourse with popular events like the annual BC Derby.

Thoroughbred racing is divided into two codes: flat racing and jump races. The most significant races are categorised as Group races or Graded stakes races. Every governing body is free to set its own standards, so the quality of races may differ. Horses are also run under different conditions, for example Handicap races, Weight for Age races or Scale-Weight. Some of the most prestigious races in the World, such as the Grand National or Melbourne Cup are run as handicaps.

Flat races can be run under varying distances and on different terms. Historically, the major flat racing countries were Australia, England, Ireland, France and the United States, but other countries, such as Japan or Dubai, have emerged in recent decades. Some countries and regions have a long tradition as major breeding centers, namely Ireland and Kentucky.

In Europe and Australia, virtually all major races are run on turf (grass) courses, while in the United States, dirt surfaces (or, lately, artificial surfaces such as Polytrack) are prevalent. In Canada, South America and Asia, both surface types are common.

Jump races and steeplechases, called National Hunt racing in the United Kingdom and Ireland, are run over long distances, usually from two miles (3,200 m) up to four and a half miles (7,200 m), and horses carry more weight. Many jump racers, especially those bred in France, are not Thoroughbreds, being classified as AQPS. Novice jumping races involve horses that are starting out a jumping career, including horses that previously were trained in flat racing. National Hunt racing is distinguished between hurdles races and chases: the former are run over low obstacles and the latter over larger fences that are much more difficult to jump. National Hunt races are started by flag, which means that horses line up at the start behind a tape. Jump racing is popular in the UK, Ireland, France and parts of Central Europe, but only a minor sport or completely unknown in most other regions of the world. National Hunt flat races (or "bumpers") without fences or hurdles are also staged to provide experience for horses which have not taken part in flat racing.[5]

In the world's major Thoroughbred racing countries, breeding of racehorses is a huge industry providing over a million jobs worldwide. While the attention of horseracing fans and the media is focused almost exclusively on the horse's performance on the racetrack or for male horses, possibly its success as a sire, little publicity is given to the brood mares. Such is the case of La Troienne, one of the most important mares of the 20th century to whom many of the greatest Thoroughbred champions, and dams of champions can be traced.