For other meanings of "Thoth", or of "Djehuti" and similar, see Thoth (disambiguation).

Thoth (/ˈθoʊθ/ or /ˈtoʊt/; from Greek Θώθ thṓth, from Egyptian ḏḥwty, perhaps pronounced */tʃʼiħautiː/ or */ɟiħautiː/, depending on the phonological interpretation of Egyptian's emphatic consonants) was one of the deities of the Egyptian pantheon. In art, he was often depicted as a man with the head of an ibis or a baboon, animals sacred to him. His feminine counterpart was Seshat, and his wife was Ma'at.[3]

Thoth's chief temple was located in the city of Khmun,[note 1][4] later called Hermopolis Magna during the Greco-Roman era[5] (in reference to him through the Greeks' interpretation that he was the same as their god Hermes) and Shmounein in the Coptic rendering, and was partially destroyed in 1826.[6] In that city, he led the Ogdoad pantheon of eight principal deities. He also had numerous shrines within the cities of Abydos, Hesert, Urit, Per-Ab, Rekhui, Ta-ur, Sep, Hat, Pselket, Talmsis, Antcha-Mutet, Bah, Amen-heri-ab, and Ta-kens.[7]

Thoth played many vital and prominent roles in Egyptian mythology, such as maintaining the universe, and being one of the two deities (the other being Ma'at) who stood on either side of Ra's boat.[8] In the later history of ancient Egypt, Thoth became heavily associated with the arbitration of godly disputes,[9] the arts of magic, the system of writing, the development of science,[10] and the judgment of the dead.[11]

The Egyptian of ḏḥwty is not fully known, but may be reconstructed as *ḏiḥautī, based on the Ancient Greek borrowing Thōth (Θώθ [tʰɔːtʰ]) or Theut and the fact that it evolved into Sahidic Coptic variously as Thoout, Thōth, Thoot, Thaut, as well as Bohairic Coptic Thōout. The final -y may even have been pronounced as a consonant, not a vowel.[13] However, many write "Djehuty", inserting the letter 'e' automatically between consonants in Egyptian words, and writing 'w' as 'u', as a convention of convenience for English speakers, not the transliteration employed by Egyptologists.[14]

According to Theodor Hopfner,[15] Thoth's Egyptian name written as ḏḥwty originated from ḏḥw, claimed to be the oldest known name for the ibis although normally written as hbj. The addition of -ty denotes that he possessed the attributes of the ibis.[16] Hence his name means "He who is like the ibis". 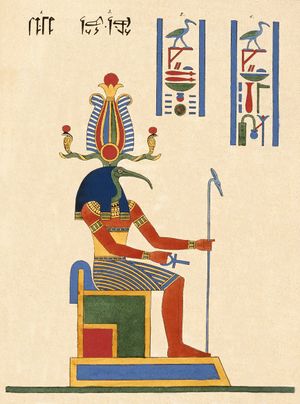 Not counting differences in spelling, Thoth had many names and titles, like other goddesses and gods. (Similarly, each Pharaoh, considered a god himself, had five different names used in public.[17])

In addition, Thoth was also known by specific aspects of himself, for instance the moon god Iah-Djehuty, representing the Moon for the entire month,.[19] The Greeks related Thoth to their god Hermes due to his similar attributes and functions.[20] One of Thoth's titles, "Three-times great, great" (see Titles) was translated to the Greek τρισμεγιστος (Trismegistos), making Hermes Trismegistus.[21] 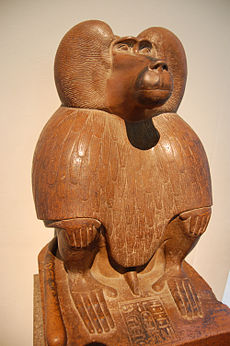 Thoth has been depicted in many ways depending on the era and on the aspect the artist wished to convey. Usually, he is depicted in his human form with the head of an ibis.[22] In this form, he can be represented as the reckoner of times and seasons by a headdress of the lunar disk sitting on top of a crescent moon resting on his head. When depicted as a form of Shu or Ankher, he was depicted to be wearing the respective god's headdress. Sometimes he was also seen in art to be wearing the Atef crown or the United Crowns of Upper and Lower Egypt.[16] When not depicted in this common form, he sometimes takes the form of the ibis directly.[22]

He also appears as a dog-faced baboon or a man with the head of a baboon when he is A'an, the god of equilibrium.[23] In the form of A'ah-Djehuty he took a more human-looking form.[24] These forms are all symbolic and are metaphors for Thoth's attributes. The Egyptians did not believe these gods actually looked like humans with animal heads.[25] For example, Ma'at is often depicted with an ostrich feather, "the feather of truth," on her head,[26] or with a feather for a head.[27]

Thoth's roles in Egyptian mythology were many. He served as a mediating power, especially between good and evil, making sure neither had a decisive victory over the other.[28] He also served as scribe of the gods,[29] credited with the invention of writing and alphabets (i.e. hieroglyphs) themselves.[30] In the underworld, Duat, he appeared as an ape, A'an, the god of equilibrium, who reported when the scales weighing the deceased's heart against the feather, representing the principle of Ma'at, was exactly even.[31]

The ancient Egyptians regarded Thoth as One, self-begotten, and self-produced.[22] He was the master of both physical and moral (i.e. divine) law,[22] making proper use of Ma'at.[32] He is credited with making the calculations for the establishment of the heavens, stars, Earth,[33] and everything in them.[32] Compare this to how his feminine counterpart, Ma'at was the force which maintained the Universe.[34] He is said to direct the motions of the heavenly bodies. Without his words, the Egyptians believed, the gods would not exist.[29] His power was unlimited in the Underworld and rivalled that of Ra and Osiris.[22]

The Egyptians credited him as the author of all works of science, religion, philosophy, and magic.[35] The Greeks further declared him the inventor of astronomy, astrology, the science of numbers, mathematics, geometry, land surveying, medicine, botany, theology, civilized government, the alphabet, reading, writing, and oratory. They further claimed he was the true author of every work of every branch of knowledge, human and divine.[30]

Thoth has played a prominent role in many of the Egyptian myths. Displaying his role as arbitrator, he had overseen the three epic battles between good and evil. All three battles are fundamentally the same and belong to different periods. The first battle took place between Ra and Apep, the second between Heru-Bekhutet and Set, and the third between Horus and Set . In each instance, the former god represented order while the latter represented chaos. If one god was seriously injured, Thoth would heal them to prevent either from overtaking the other.

Thoth was also prominent in the Asarian myth, being of great aid to Isis. After Isis/Aset gathered together the pieces of Asar's dismembered body, he gave her the words to resurrect him so she could be impregnated and bring forth Horus. After a battle between Horus and Set in which the latter plucked out Horus' eye, Thoth's counsel provided him the wisdom he needed to recover it. Thoth was the god who always speaks the words that fulfill the wishes of Ra.

This mythology also credits him with the creation of the 365 day calendar. Originally, according to the myth, the year was only 360 days long and Nut was sterile during these days, unable to bear children. Thoth gambled with the Moon for 1/72nd of its light (360/72 = 5), or 5 days, and won. During these 5 days, Nut gave birth to Kheru-ur (Horus the Elder, Face of Heaven), Osiris, Set, Isis, and Nephthys. 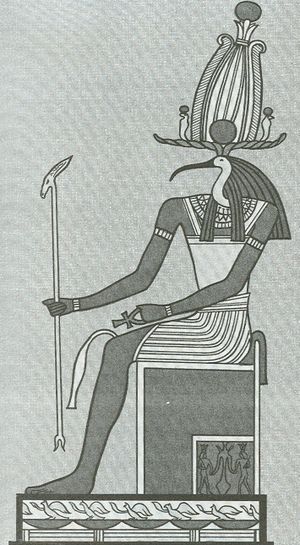 Thoth, sitting on his throne

Thoth was originally a moon god. The moon not only provides light at night, allowing time to still be measured without the sun, but its phases and prominence gave it a significant importance in early astrology/astronomy. The cycles of the moon also organized much of Egyptian society's rituals and events, both civil and religious. Consequently, Thoth gradually became seen as a god of wisdom, magic, and the measurement and regulation of events and of time.[36] He was thus said to be the secretary and counselor of the sun god Ra, and with Ma'at (truth/order) stood next to Ra on the nightly voyage across the sky.

Thoth became credited by the ancient Egyptians as the inventor of writing, and was also considered to have been the scribe of the underworld; and the Moon became occasionally considered a separate entity, now that Thoth had less association with it and more with wisdom. For this reason Thoth was universally worshipped by ancient Egyptian scribes. Many scribes had a painting or a picture of Thoth in their "office". Likewise, one of the symbols for scribes was that of the ibis.

In art, Thoth was usually depicted with the head of an ibis, possibly because the Egyptians saw curve of the ibis' beak as a symbol of the crescent moon.[37] Sometimes, he was depicted as a baboon holding up a crescent moon, as the baboon was seen as a nocturnal and intelligent creature. The association with baboons led to him occasionally being said to have as a consort Astennu, one of the (male) baboons at the place of judgment in the underworld. On other occasions, Astennu was said to be Thoth himself.

During the late period of Egyptian history, a cult of Thoth gained prominence due to its main centre, Khmun (Hermopolis Magna), also becoming the capital. Millions of dead ibis were mummified and buried in his honour. The rise of his cult also led to his cult seeking to adjust mythology to give Thoth a greater role.

Thoth was inserted in many tales as the wise counselor and persuader, and his association with learning and measurement led him to be connected with Seshat, the earlier deification of wisdom, who was said to be his daughter, or variably his wife. Thoth's qualities also led to him being identified by the Greeks with their closest matching god Hermes, with whom Thoth was eventually combined as Hermes Trismegistus, also leading to the Greeks' naming Thoth's cult centre as Hermopolis, meaning city of Hermes.

It is also considered that Thoth was the scribe of the gods rather than a messenger. Anpu (or Hermanubis) was viewed as the messenger of the gods, as he travelled in and out of the Underworld and presented himself to the gods and to humans. It is more widely accepted that Thoth was a record keeper, not a divine messenger. In the Papyrus of Ani copy of the Egyptian Book of the Dead the scribe proclaims "I am thy writing palette, O Thoth, and I have brought unto thee thine ink-jar. I am not of those who work iniquity in their secret places; let not evil happen unto me."[38] Chapter XXXb (Budge) of the Book of the Dead is by the oldest tradition said to be the work of Thoth himself.[39]

There was also an Egyptian pharaoh of the Sixteenth dynasty named Djehuty (Thoth) after him, and who reigned for three years.