From Infogalactic: the planetary knowledge core
(Redirected from Thoughtform)
Jump to: navigation, search
For the 2012 Italian film, see Tulpa (film).

Tulpa (Tibetan: སྤྲུལ་པ, Wylie: sprul-pa; Sanskrit: निर्मित nirmita[1] and निर्माण nirmāṇa;[2] "to build" or "to construct") also translated as "magical emanation",[3] "conjured thing" [4] and "phantom" [5] is a concept in mysticism of a being or object which is created through sheer spiritual or mental discipline alone. It is defined in Indian Buddhist texts as any unreal, illusory or mind created apparition.

According to Alexandra David-Néel, tulpas are "magic formations generated by a powerful concentration of thought." It is a materialized thought that has taken physical form and is usually regarded as synonymous to a thoughtform.[6]

One early Buddhist text, the Samaññaphala Sutta lists the ability to create a “mind-made body” (manomāyakāya) as one of the "fruits of the contemplative life". Commentarial texts such as the Patisambhidamagga and the Visuddhimagga state that this mind-made body is how Gautama Buddha and arhats are able to travel into heavenly realms using the continuum of the mindstream (bodhi) and it is also used to explain the multiplication miracle of the Buddha as illustrated in the Divyavadana, in which the Buddha multiplied his emanation body ("nirmita") into countless other bodies which filled the sky. A Buddha or other realized being is able to project many such "nirmitas" simultaneously in an infinite variety of forms, in different realms simultaneously.[7]

The Indian Buddhist philosopher Vasubandhu defined nirmita as a siddhi or psychic power (Pali: iddhi, Skt: ṛddhi) developed through Buddhist discipline, concentrative discipline and wisdom (samadhi) in his seminal work on Buddhist philosophy, the Abhidharmakośa. Asanga's Bodhisattvabhūmi defines nirmāṇa as a magical illusion and “basically, something without a basis”.[8] The Madhyamaka school of philosophy sees all reality as empty of essence, all reality is seen as a form of nirmita or magical illusion.

Tulpa is a spiritual discipline and teachings concept in Tibetan Buddhism and Bon. The term “thoughtform” is used as early as 1927 in Evans-Wentz' translation of the Tibetan Book of the Dead. John Myrdhin Reynolds in a note to his English translation of the life story of Garab Dorje defines a tulpa as “an emanation or a manifestation.”[1]

As the Tibetan use of the tulpa concept is described in the book Magical Use of Thoughtforms, the student was expected to come to the understanding that the tulpa was just a hallucination. While they were told that the tulpa was a genuine deity, "The pupil who accepted this was deemed a failure – and set off to spend the rest of his life in an uncomfortable hallucination."[9]

The term is used in the works of Alexandra David-Néel, a Belgian-French explorer, spiritualist and Buddhist, who observed these practices in 20th century Tibet. David-Néel wrote that “an accomplished Bodhisattva is capable of effecting ten kinds of magic creations. The power of producing magic formations, tulkus or less lasting and materialized tulpas, does not, however, belong exclusively to such mystic exalted beings. Any human, divine or demoniac being may be possessed of it. The only difference comes from the degree of power, and this depends on the strength of the concentration and the quality of the mind itself.”[10]

David-Néel also wrote of the tulpa's ability to develop a mind of its own: “Once the tulpa is endowed with enough vitality to be capable of playing the part of a real being, it tends to free itself from its maker's control. This, say Tibetan occultists, happens nearly mechanically, just as the child, when his body is completed and able to live apart, leaves its mother's womb.”[11] David-Néel claimed to have created a tulpa in the image of a jolly Friar Tuck-like monk which later developed a life of its own and had to be destroyed.[12] David-Néel raised the possibility that her experience was illusory: “I may have created my own hallucination.” 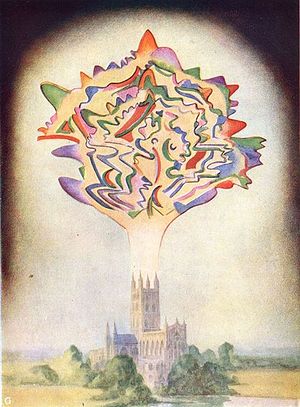 Thought-form of the Music of Gounod, according to Annie Besant and C.W. Leadbeater in Thought Forms (1901).

A thoughtform is the equivalent concept to a tulpa but within the Western occult tradition. The Western understanding is believed by some to have originated as an interpretation of the Tibetan concept.[6] Its concept is related to the Western philosophy and practice of magic.[13]

In recent years, a subculture has formed online who create hallucinations or imaginary friends which they call tulpas and believe to be sentient. Most such people do not believe that there is anything supernatural about tulpas. A number of web sites explain the methods people use to create tulpas of this sort.[14][15][16][17] Of them include "tulpa.info" as well as the Reddit board r/tulpas, dedicated to the subject. They also claim to be able to do various tricks such as "Possession", where their Tulpa is able to control a part of the body with their consent, or "Switching" were the tulpa and the one who created it exchange their roles. Chidambaram Ramesh, an Indian author and researcher, has mentioned in his book "Thought Forms and Hallucinations" that the creation of thought forms and other mental entities like Tulpa etc., is the result of holographic mind processing.[further explanation needed]