From Infogalactic: the planetary knowledge core
Jump to: navigation, search
This article is about a military-related term. For the band, see Thousand Yard Stare (band). For the Chicane album, see Thousand Mile Stare. 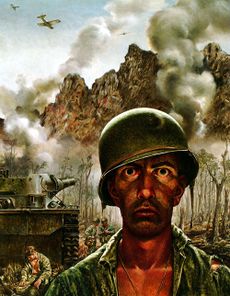 The thousand-yard stare or two-thousand-yard stare is a phrase coined to describe the limp, blank, unfocused gaze of a battle-weary soldier, but the symptom it describes may also be found among victims of other types of trauma. A characteristic of shell shock, the despondent stare reflects dissociation from trauma. The thousand-yard stare is thus often seen in cases of incipient post-traumatic stress disorder. It does not necessarily indicate PTSD, however, nor will it always appear in persons who will later develop PTSD.[citation needed]

The phrase was popularized after Life magazine published the painting Marines Call It That 2,000 Yard Stare by World War II artist and correspondent Tom Lea,[1] although the painting was not referred to with that title in the 1945 magazine article. The painting, a 1944 portrait of a Marine at the Battle of Peleliu, is now held by the United States Army Center of Military History in Fort Lesley J. McNair, Washington, D.C.[2] About the real-life Marine who was his subject, Lea said:

He left the States 31 months ago. He was wounded in his first campaign. He has had tropical diseases. He half-sleeps at night and gouges Japs out of holes all day. Two-thirds of his company has been killed or wounded. He will return to attack this morning. How much can a human being endure?[3]

When recounting his arrival in Vietnam in 1965, then-Corporal Joe Houle said he saw no emotion in the eyes of his new squad: "The look in their eyes was like the life was sucked out of them," later learning that the term for their condition was the 1,000-yard stare. "After I lost my first friend, I felt it was best to be detached," he explained.[4]