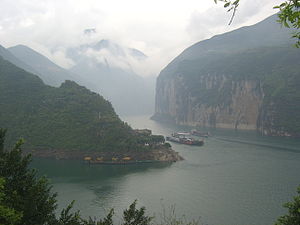 The Qutang Gorge along the Yangtze River. 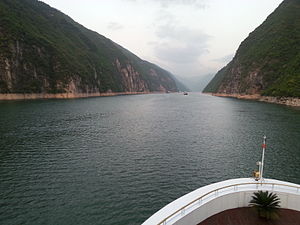 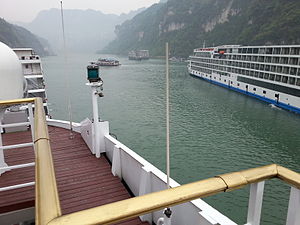 listen now (help·info)) is a scenic area along the middle reaches of the Yangtze River in the People's Republic of China, which is classified as a AAAAA scenic area (the highest level) by the China National Tourism Administration.[1]

The Three Gorges Dam was constructed at a place called Sāndòupíng in the middle of the Xiling Gorge. The reservoir dam was completed in the summer of 2006, and the water level quickly reached the maximum level of 110m above the downstream river. The project was completed by the end of 2008, although a ship lift is still in course of construction, and expected to be completed in 2015.

The dam and Three Gorges Reservoir has had a massive impact upon the region's ecology and people, involving the mass relocation of towns and villages. The higher water level has changed the scenery of the Three Gorges, so that the river is wider and the mountains appear lower. However, the mountains still tower above the river, and the gorges continue to offer spectacular views of the surrounding cliffs.

The riverboat companies that operate in the Three Gorges are experiencing a boom in demand for river cruises. The increased width and depth of the river permits larger ships through the gorges, and there has been a significant increase of river traffic of all kinds, including bulk cargo and container barges. 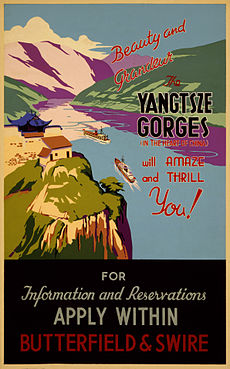 Travel poster for the Three Gorges Region (circa 1930).