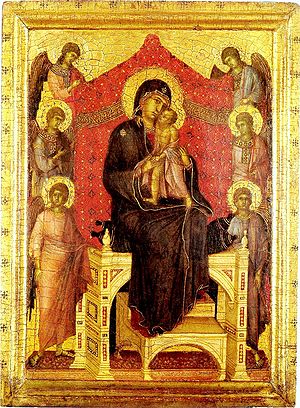 Madonna and Child with Angels, Duccio, 1282

Three Hail Marys is a traditional Roman Catholic devotional practice of reciting three Hail Marys as a petition for purity and other virtues. Believers recommended that it be prayed after waking in the morning, and before going to bed, following the examination of conscience at night. This devotion has been recommended by St. Anthony of Padua, St. Alphonsus Liguori, St. John Bosco and St. Leonard of Port Maurice. Two saints, Mechtilde and Gertrude, are said to have received revelations from the Blessed Virgin Mary regarding this practice. 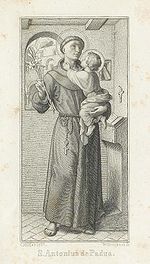 The practice of reciting the Hail Mary three times dates at least to the 12th century. One of the first to practice and recommend it was St. Anthony of Padua (1195–1231). His purpose was "to honor the spotless Virginity of Mary and to preserve a perfect purity of mind, heart and body in the midst of the dangers of the world". The practice of saying three Hail Marys in the evening somewhere about sunset had become general throughout Europe in the first half of the fourteenth century and it was recommended and indulgenced by Pope John XXII in 1318 and 1327.[1]

This practice was observed by Franciscans and eventually developed into the Angelus prayer.[1]

Revelations from the Blessed Virgin Mary

St. Mechtilde of Hackeborn (1241-1299), a Benedictine nun of the convent of Helfta, experienced three visions of the Virgin Mary. Mechtilde was distressed over her eternal salvation and prayed to the Virgin to be present at the hour of her death. In these appearances, Mary reassured her, and taught her to understand especially on how the Three Hail Marys honor the three persons of the Blessed Trinity. The first prayer recalls the power she received from the Eternal Father to intercede for sinners, the second commemorates the wisdom received from the Son; and the third, the love she bears, filled by Holy Spirit.

According to St. Gertrude (1256–1301), the Blessed Virgin Mary promised the following: "To any soul who faithfully prays the Three Hail Marys I will appear at the hour of death in a splendor of beauty so extraordinary that it will fill the soul with Heavenly consolation."[citation needed]

Later on, St. Leonard of Port Maurice "had the three Ave Marias recited morning and evening in honor of Mary Immaculate, to obtain the grace of avoiding all mortal sins during the day and night; moreover, he promised in a special manner eternal salvation to all those who proved constantly faithful to this practice."

Doctor of the Church St. Alphonsus Liguori (1696–1787) adopted this pious practice and highly recommended it. He told parents to train their children to acquire the habit of saying three Hail Marys in the morning and evening. After each Hail Mary, he advised that the following prayer be said: "By thy pure and Immaculate Conception, O Mary, make my body pure and my soul holy."

According to the St. Martha Catholic Church of the Pallottine Fathers, after Night Prayers: "Many saints have had the practice of adding three Hail Marys here in honor of Mary's purity for the grace of a chaste and holy life."[1] Thus, it has been recommended as a daily practice for people who have received the Sacrament of Confirmation that they pray the Three Hail Marys for "purity of mind, heart and body" after examination of conscience, before going to bed.

St. Virgilius Council 185, Knights of Columbus, in Newtown, Connecticut, initiated a Three Hail Mary's Prayer Drive in support of those affected by the shootings at Sandy Hook Elementary School. The Council requested other Knights Councils and religious organizations to encourage the praying of one Hail Mary for the deceased and their families, one for first responders and teachers, and one for the community.[3][4]