Three Mile Island Nuclear Generating Station (TMI) is a nuclear power plant located on Three Mile Island in the Susquehanna River, south of Harrisburg, Pennsylvania in Londonderry Township. It has two separate units, TMI-1 and TMI-2. The plant is widely known for having been the site of the most significant accident in United States commercial nuclear energy, on 28 March 1979, when TMI-2 suffered a partial meltdown. According to the Nuclear Regulatory Commission, the accident resulted in no deaths or injuries to plant workers or members of nearby communities.[1] Follow-up epidemiology studies have also not linked any incidents of cancer with the accident.[2][3][4][5] The reactor core of TMI-2 has since been removed from the site, but the site has not been decommissioned.[6]

Three Mile Island is so named because it is located three miles downriver from Middletown, Pennsylvania.[7] The plant was originally built by General Public Utilities Corporation, later renamed GPU Incorporated.[8] The plant was operated by Metropolitan Edison Company (Met-Ed), a subsidiary of the GPU Energy division. During 2001 GPU Inc. merged with FirstEnergy Corporation.[9]

The Nuclear Regulatory Commission defines two emergency planning zones around nuclear power plants: a plume exposure pathway zone with a radius of 10 miles (16 km), concerned primarily with exposure to, and inhalation of, airborne radioactive contamination, and an ingestion pathway zone of about 50 miles (80 km), concerned primarily with ingestion of food and liquid contaminated by radioactivity.[10]

The Three Mile Island Unit 1 is a pressurized water reactor designed by Babcock & Wilcox with a net generating capacity of 852 MWe. The initial construction cost was US$400 million, equal to $1.92 billion today.[clarification needed][citation needed] Unit 1 first came online on April 19, 1974, and began commercial operations on September 2, 1974.[12] TMI-1 is licensed to operate for 40 years from its first run, and in 2009, was extended 20 years, which means it may operate until April 19, 2034.[13][14] TMI-1 has a closed-cycle cooling system for its main condenser using two natural draft cooling towers. Makeup water is drawn from the river to replace the water lost via evaporation in the towers. Once-through cooling with river water is used for the service water system which cools auxiliary components and removes decay heat when the reactor is shutdown. When TMI-2 suffered its accident in 1979, TMI-1 was offline for refueling. It was brought back online in October 1985, after public opposition, several federal court injunctions, and some technical and regulatory complications.[15]

In February 1993, a man drove his car past a checkpoint at the TMI nuclear plant, then broke through an entry gate. He eventually crashed the car through a secure door and entered the Unit 1 turbine building. The intruder, who had a history of mental illness, hid in the turbine building and was not apprehended for four hours. 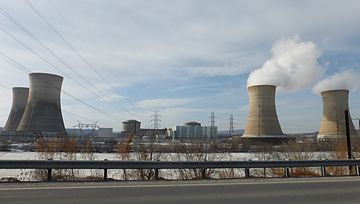 On November 21, 2009, a release of radioactivity occurred inside the containment building of TMI-1 while workers were cutting pipes. Exelon Corporation stated to the public that "A monitor at the temporary opening cut into the containment building wall to allow the new steam generators to be moved inside showed a slight increase in a reading and then returned to normal. Approximately 20 employees were treated for mild radiation exposure."[16] As of November 22, 2009[update], it is believed that no radiation escaped the containment building and the public is not in any danger. The inside airborne contamination was caused by a change in air pressure inside the containment building that dislodged small irradiated particles in the reactor piping system. Some of the small particles became airborne inside the building and were detected by an array of monitors in place to detect such material. The air pressure change occurred when inside building ventilation fans were started to support outage activities. The site has modified the ventilation system to prevent future air pressure changes. Work continued on the project the following day. On January 24, 2010, TMI-1 was brought back online.[17]

Exelon Corporation was created in October 2000 by the merger of PECO Energy Company and Unicom, of Philadelphia and Chicago respectively.[18] Unicom owned Commonwealth Edison. The PECO share in AmerGen was acquired by Exelon during late 2000. Exelon acquired British Energy's share in AmerGen in 2003,[19] and transferred Unit 1 under the direct ownership and operation of its Exelon Nuclear business unit.[20][21] According to Exelon Corporation, "many people are surprised when they learn that Three Mile Island is still making electricity, enough to power 800,000 households" from its undamaged and fully functional reactor unit 1.[22]

The Three Mile Island Unit 2 was also a pressurized water reactor constructed by B&W, similar to Unit 1. The only difference was that TMI-2 was slightly larger with a net generating capacity of 906 MWe, compared to TMI-1, which delivers 852 MWe. Unit 2 received its operating license on February 8, 1978, and began commercial operation on December 30, 1978.[23]

On March 28, 1979, there was a cooling system malfunction that caused a partial melt-down of the reactor core. This loss-of-coolant accident resulted in the release of an amount of radioactivity, estimated at 43,000 curies (1.59 PBq) of radioactive krypton-85 gas (half life 10 yrs), but less than 20 curies (740 GBq) of the especially hazardous iodine-131 (half life 8 days), into the surrounding environment.[1]

A World Nuclear Association review concluded that no deaths, injuries or adverse health effects resulted from the accident,[24] and a report by Columbia University epidemiologist Maureen Hatch confirmed this finding.[2][25] Further epidemiology studies have not shown any increase in cancer as a result of the accident.[3][4][5] However, almost $25 million was paid in insurance settlements to people who then agreed not to discuss their injuries in ongoing litigation.[26]

The incident was widely publicized internationally, and had far-reaching effects on public opinion, particularly in the United States. The China Syndrome, a movie about a nuclear disaster, which was released just 12 days before the incident, became a blockbuster hit.[27]

On January 22, 2010 officials at the Nuclear Regulatory Commission announced the electrical generator from the damaged Unit 2 reactor at TMI will be used at Shearon Harris Nuclear Plant in New Hill, North Carolina. The generator was transported in two parts, weighing a combined 670 tons. It was refurbished and installed during a refueling outage at Shearon Harris NPP in November 2010. TMI's Unit 2 reactor has been shut down since the partial meltdown in 1979.[28] 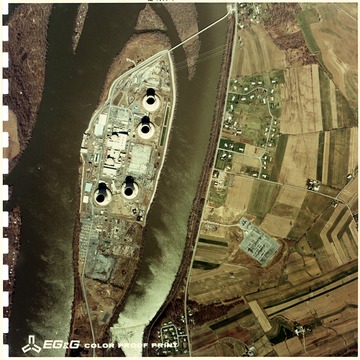 The Nuclear Regulatory Commission's estimate of the risk each year of an earthquake intense enough to cause core damage to the reactor at Three Mile Island was 1 in 25,000, according to an NRC study published in August 2010.[29][30]