The Pittsburgh Three Rivers Regatta is an annual motorboat and river festival held in Pittsburgh, Pennsylvania, United States. The festival was founded in 1977[1] and is often host to an F1 ChampBoat Series race. The F1 race, originally held in 1982, was the first F1 power boat race held in the United States.[2] 2008 saw the return of F1 Power Boat racing at the Pittsburgh Regatta after a two-year hiatus following the 2005 festival.[2] Today, the race is typically scheduled to coincide with the July 4th holiday, although prior to 2004 it had traditionally been held in early August.[3] The festival is the largest inland regatta in the United States,[4] drawing tens of thousands of fans along Allegheny River. The F1 race course consists of a 4-pin 1.25 (2 km) course.[5] In 2008, the Pittsburgh regatta F1 ChampBoat race was nationally broadcast on the Speed Channel.[6]

The Regatta is the annual continuation of the original speed boat and paddle wheeler races of the "Pittsburgh Welcome Week Regatta" held annually starting on May 21, 1949 and through the mid-1950s. 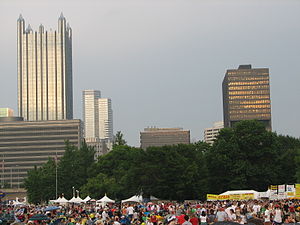 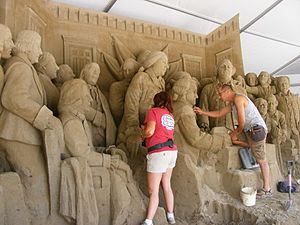 Artists working on an annual sand sculpture for the Regatta

The race corresponds to a three-day festival in downtown Pittsburgh consisting of variety of events including free concerts, food vendors, aerial competitions, various water sports, dragon boat races, and the July Fourth fireworks display for the City of Pittsburgh. Over 1.5 million people are estimated to have attended some aspect of the regatta events every year.[4]

On August 7, 1988, one of the Formula 1 boats went out of control and crashed into a crowd near Three Rivers Stadium. There were 24 injuries.[7] The accident was captured on live TV during the broadcast of a Pittsburgh Pirates and New York Mets baseball game from a blimp above the stadium.

Held August 11 & 12 and hosted the "Mid-America Sternwheeler Race" with finishing line being the Smithfield Street Bridge.[8][9]